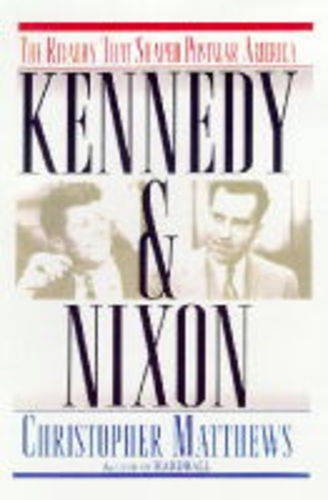 John Kennedy and Richard Nixon shared a dream of being the great young leader of their age. Starting as congressmen in the class of 1946, the two men developed a friendship and admiration for each other that would last for more than a decade. But what drove history, Matthews shows, was the enmity between these two towering figures whose 1960 presidential contest would set the nation's bitter course for years to come. In this startling dual portrait - a modern-day Amadeus, with Nixon as the talented, frustrated, always outdone Salieri to Kennedy's Mozart, the charismatic genius - Matthews shows how the early fondness between the two men (Kennedy told a trusted friend that if he didn't receive the Democratic nomination in 1960, he would vote for Nixon) degenerated into distrust and paranoia, the same emotions that, in the early 1970s, ravaged the nation. Christopher Matthews's revealing book sheds new light on this complicated relationship and the role that it played in shaping America's history.… (more)

LibraryThing member mattrutherford
Didn't learn much new, but no doubt it was revelatory since it was written right after the Nixon tapes were released. Still, a pleasant enough read.

The Haldeman diaries : inside the Nixon White House by H. R. Haldeman
Taking charge : the Johnson White House tapes, 1963-1964 by Michael R. Beschloss
Playing with Fire: The 1968 Election and the Transformation of American Politics by Lawrence O'Donnell
Reaching for Glory: Lyndon Johnson's Secret White House Tapes, 1964-1965 by Michael R. Beschloss
Shadow : five presidents and the legacy of Watergate by Bob Woodward
7 more
The arrogance of power : the secret world of Richard Nixon by Anthony Summers
The death of a president, November 20-November 25, 1963 by William Manchester
President Kennedy profile of power by Richard Reeves
America in search of itself : the making of the President, 1956-1980 by Theodore H. White
Richard Milhous Nixon : the rise of an American politician by Roger Morris
A question of character : a life of John F. Kennedy by Thomas C. Reeves
Nixon and Kissinger : partners in power by Robert Dallek
Fewer