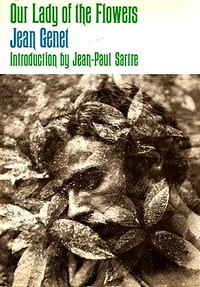 Our Lady of the Flowers

Jean Genet's first, and arguably greatest, novel was written while he was in prison. As Sartre recounts in his introduction, Genet penned this work on the brown paper which inmates were supposed to use to fold bags as a form of occupational therapy. The masterpiece he managed to produce under those difficult conditions is a lyrical portrait of the criminal underground of Paris and the thieves, murderers and pimps who occupied it. Genet approached this world through his protagonist, Divine, a male transvestite prostitute. In the world of Our Lady of the Flowers, moral conventions are turned on their head. Sinners are portrayed as saints and when evil is not celebrated outright, it is at least viewed with a benign indifference. Whether one finds Genet's work shocking or thrilling, the novel remains almost as revolutionary today as when it was first published in 1943 in a limited edition, thanks to the help of one its earliest admirers, Jean Cocteau.… (more)

LibraryThing member Niecierpek
This book was both interesting and not. Interesting as written in its entirety by Genet serving time for theft in a prison cell in Paris in 1943. It was written on paper used by the prisoners to make bags, and then re-written from memory after the whole manuscript was confiscated and destroyed.
As for what the novel is about, we hit the un-interesting part, or at least uninteresting for me since it has attracted a lot of attention since it was published. It is hailed as a masterpiece of its genre, and the preface is written by no one less than Jean Paul Sartre. Satre seemed to be fascinated by the contradictions there: feminine/masculine, poetic/gutter-like, the bottom, but sublime.

The book is about Genet, a homosexual and a thief, a drag queen, portrayed as a feminine, Divine, and her/his lover Darling, a pimp. The whole story is told in sometimes very flowery, sometimes coarse, and sometimes poetic language. Lots of it, if not everything, is Genet's homosexual fantasies.
It just didn't interest me enough to finish it.… (more)
2 more
LibraryThing member NaggedMan
This edition worth having for Sartre's lengthy, thoughtful and moving introduction
LibraryThing member lethalmauve
"Poetry is willful. It is not an abandonment, a free and gratuitous entry by the senses; it is not to be confused with sensuality, but rather, opposing it, it was born, for example, on Saturdays, when, to clean the rooms, housewives put the red velvet chairs, gilded mirrors, and mahogany tables outside, in the nearby meadow."

Jean Genet wrote Our Lady of Flowers whilst in prison. This is an author's personal masturbatory material — shockingly voyeuristic and kinky. A self-objectification for pleasure against a place of biting boredom and limited freedom. More than its acts of perversity and explicit eroticism — a hundred words in place of the word 'penis' and farts appearing oddly ("But only the odor of my own farts delights me, and those of the handsomest boy repel me.") —it tells a story amidst its disjointed stream of thoughts. Exclusively homosexual, this book refreshingly spurs the male gaze onto different variants of men. Genet's set of characters, fashioned from his abyssal imagination opposite the four walls of his cell where he makes them wear the clothes and personalities he wants, wanders in a world of pimps and criminals. They blend themselves then create a murky intersection of Genet and his characters; Genet is his characters; these characters are Genet: "[...] the story of Divine, whom I knew only slightly, the story of Our Lady of the Flowers, and, never fear, my own story."

His words harden, but in rare moments they unexpectedly soften. And when they do, Our Lady of the Flowers touches the underground tunnel of vulnerable existence ("She will go on living only to hasten toward Death." and "I wanted to swallow myself by opening my mouth very wide and turning it over my head so that it would take in my whole body, and then the Universe, until all that would remain of me would be a ball of eaten thing which little by little would be annihilated: that is how I see the end of the world."). It can be devastating and painful too. This is very different than most and I might as well say, perhaps, groundbreaking with its structure and content. But I don't think I would have appreciated it better if I did not read Sartre's brilliant introduction. His deep insight about the book's significance and the linear sentiments in its non-linearity makes it shine into another kind of light. But this is not something I would say I find totally stimulating and arousing nor can I say this has moved and seduced me.

Stumbling upon it in a list of books Susan Sontag recommended I can't help but wonder if I dealt with it as best as I could without the preconceived notions I shaped for myself after merely reading the synopsis. A more piercing question, did John Waters sculpt his own notorious Divine from Genet's?

"I let myself drift, as to the depth of an ocean, to the depths of dismal neighborhood of hard and opaque but rather light houses, to the inner gaze of memory, for the matter of memory is porous."… (more)
Fewer