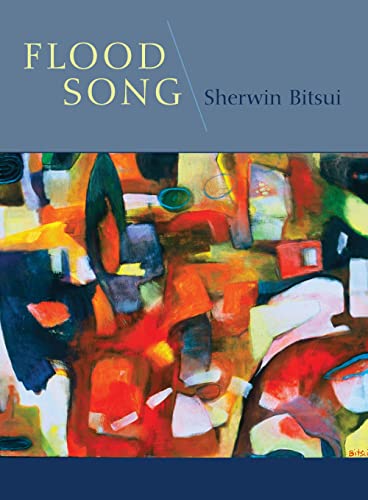 "Sherwin Bitsui's new poetry collection,Flood Song--a sprawling, panoramic journey through landscape, time, and cultures--is well worth the ride."--Poets & Writers "Bitsui's poetry is elegant, probative, and original. His vision connects worlds."--New Mexico Magazine "His images can tilt on the side of surrealism, yet his work can be compellingly accessible."--Arizona Daily Star "Sherwin Bitsui sees violent beauty in the American landscape. There are junipers, black ants, axes, and cities dragging their bridges. I can hear Whitman's drums in these poems and I can see Ginsberg's supermarkets. But above all else, there is an indigenous eccentricity, 'a cornfield at the bottom of a sandstone canyon,' that you will not find anywhere else."--Sherman Alexie Native traditions scrape against contemporary urban life inFlood Song, an interweaving painterly sequence populated with wrens and reeds, bricks and gasoline. PoetSherwin Bitsui is at the forefront of a new generation of Native writers who resist being identified solely by race. At the same time, he comes from a traditional indigenous family andFlood Song is filled with allusions to Dine (Navajo) myths, customs, and traditions. Highly imagistic and constantly in motion, his poems draw variously upon medicine song and contemporary language and poetics. "I map a shrinking map," he writes, and "bite my eyes shut between these songs." An astonishing, elemental volume. I retrace and trace over my fingerprints Here: magma, there: shore, and on the peninsula of his finger pointing west-- a bell rope woven from optic nerves is tethered to mustangs galloping from a nation lifting its first page through the man hole--burn marks in the saddle horn, static in the ear that cannot sever cries from wailing. Sherwin Bitsui's acclaimed first book of poems,Shapeshift, appeared in 2003. He has earned many honors for his work, including fellowships from the Witter Bynner Foundation and Lannan Foundation, and he is frequently invited to poetry festivals throughout the world. He lives in Tucson, Arizona.… (more)

LibraryThing member b.masonjudy
Flood Song reverberates off of lumber, standing trees, asphalt and the desert floor. Opening up like a can of Spam, filled with toothed moths or a slick garage door.
Images roiling over!

Flies by Michael Dickman
Bender : new & selected poems by Dean Young
The new testament by Jericho Brown
King Me by Roger Reeves
The dance of no hard feelings by Mark Bibbins
16 more
Compass Rose by Arthur Sze
New and selected poems by Mary Oliver
The Infinitesimals by Laura Kasischke
Alight by Fady Joudah
The theater of night by Alberto R©Ưos
Rising, falling, hovering by C. D. Wright
Elegy owed by Bob Hicok
Fall higher by Dean Young
Break the glass by Jean Valentine
Time will clean the carcass bones : selected and new poems by Lucia Maria Perillo
The game of boxes : [poems] by Catherine Barnett
Quipu by Arthur Sze
Collected body by Valzhyna Mort
The Business of Fancydancing : stories and poems by Sherman Alexie
As is by James Galvin
Slant Six by Erin Belieu
Fewer