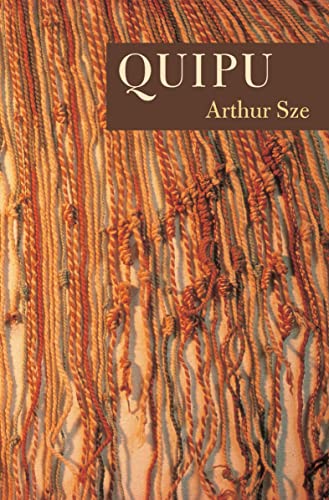 "Sze brings together disparate realms of experience---astronomy, botany, anthropology, Taoism--and observes their correspondences with an exuberant attentiveness."--The New Yorker "Sze's poems seem dazzled and haunted by patterns."--The Washington Post Quipu was a tactile recording device for the pre-literate Inca, an assemblage of colored knots on cords. In his eighth collection of poetry, Arthur Sze utilizesquipu as a unifying metaphor, knotting and stringing luminous poems that move across cultures and time, from elegy to ode, to create a precarious splendor. Revelation never comes as a fern uncoiling a frond in mist; it comes when I trip on a root, slap a mosquito on my arm. We go on, but stop when gnats lift into a cloud as we stumble into a bunch of rose apples rotting on the ground. Long admired for his poetic fusions of science, history, and anthropology, inQuipu, Sze's lines and language are taut and mesmerizing, nouns can become verbs--"where is passion that orchids the body?"--and what appears solid and -stable may actually be fluid and volatile. A point of exhaustion can become a point of renewal: it might happen as you observe a magpie on a branch, or when you tug at a knot and discover that a grief disentangles, dissolves into air. Renewal is not possible to a calligrapher who simultaneously draws characters with a brush in each hand; it occurs when the tip of a brush slips yet swerves into flame . . . Arthur Sze is the author of eight books of poetry and a volume of translations. He is the recipient of an Asian American Literary Award, a Lannan Literary Award, and fellowships from the Witter Bynner Foundation and the National Endowment for the Arts. He teaches at the Institute of American Indian Arts and lives in New Mexico.… (more)

The silk dragon : translations from the Chinese by Arthur Sze
Destination zero : poems, 1970-1995 by Sam Hamill
The ginkgo light by Arthur Sze
This art : poems about poetry by Michael Wiegers
While we've still got feet : new poems by David Budbill
27 more
Vertigo : the living dead man poems by Marvin Bell
Head Off & Split: poems by Nikky Finney
On poetry & craft : selected prose of Theodore Roethke by Theodore Roethke
The theater of night by Alberto R©Ưos
Book of my nights : poems by Li-Young Lee
In the dark by Ruth Stone
X : poems by James Galvin
A palace of pearls by Jane Miller
The blessing : new and selected poems by Richard Jones
Letter to an imaginary friend by Thomas McGrath
Sanctificum by Christopher Abani
Braided Creek : a conversation in poetry by Jim Harrison
Path, crooked path by John Balaban
Mister Skylight by Ed Skoog
Wherever you lay your head : poems by Jane Miller
Infanta by Erin Belieu
Bewilderment: New Poems and Translations by David Ferry
Armored hearts : selected and new poems by David Bottoms
Flies by Michael Dickman
Directed by desire : the collected poems of June Jordan by June Jordan
Blue Hour: Poems by Carolyn Forché
The Infinitesimals by Laura Kasischke
In search of small gods by Jim Harrison
I don't bow to Buddhas : selected poems of Yuan Mei by Mei Yuan
Deepstep come shining by C. D. Wright
Doctor Jazz by Hayden Carruth
Darkness Sticks to Everything Collected and New Poems by Tom Hennen
Fewer