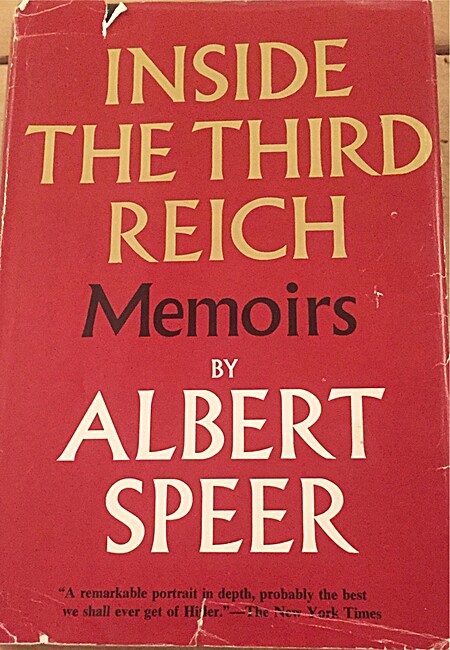 Inside the Third Reich: Memoirs

"Inside the Third Reich is a memoir written by Albert Speer, the Nazi Minister of Armaments from 1942 to 1945, serving as Adolf Hitler's main architect before this period. It is considered to be one of the most detailed descriptions of the inner workings and leadership of Nazi Germany but is controversial because of Speer's lack of discussion of Nazi atrocities and questions regarding his degree of awareness or involvement with them."--

LibraryThing member mofoty
I want to keep my distance from a work like this because although I feel Speer is mostly an honest narrator, his clear, somewhat banal account of the Third Reich, Hitler, and his own activities read like a generic memoir, somehow perverting the madness of the time—the destruction, inhuman cruelty, and the quest for absolute power. By giving us this account, Speer affirms that for the most part the atrocities of the the Third Reich were carried out by otherwise normal, almost boring men, like himself, who were tasked with a mission and carried it out to the best of their abilities. (Speer affirms this view on page 344, when he talks of an article in The Observer that spoke of him as the leader of a highly efficient, impersonal technocracy.) My fear is that this is not a sufficiently emotional account to teach us anything. It gives us an inside look, yes, but it is so self absorbed that we lose the broader view of the war's effects. We miss the sufferings of millions because we are tangled in Speer's account of day-to-day travels, power struggles within the regime, and the stubborn madness of Hitler.

Could this memoir be anything else? Should it be? Probably not. I just can't help but feel that Speer's last sacrifice should be to accept alienation, where his memoirs, like his architecture, become lost to that time.… (more)
12 more
LibraryThing member peterschmidta
Although I am still reading this book, I am finding that it presents me with new information and views of Hitler and Hitler's Germany through the eyes of Albert Speer, a favorite architect of Hitler. Considering that I have been working on this topic for oh, 25 years as a German teacher, that says a lot. It is like a look inside of another world.… (more)
LibraryThing member hermit
Albert Speer was Hitler's architect and Minister of Arms and Munitions. He was close to Hitler and gives us a glimpse of the man through his life in the years 1933 through 1945. The author wrote this memoir while serving his sentence for war crimes in Spandau prison. A sentence he agreed he deserved though he claims he did not know of the final solution. I will leave that to the reader too decide.

Speer shares what he saw as Hitler's likable traits and as a man who was capable and devoted but later or perhaps reflection in prison Speer felt these traits may have been only superficial. The work Speer did during WWII for the Third Reich was essential for the war machine to function. He claims he did not know that his friend was committing genocide but he willing used the slave labor provided for his factories.

It is mainly a book of the daily routine of the man that shared tea with Hitler and the bureaucracy that was the Third Reich. A bureaucracy that Speer knew how to handle quite well and prospered in. What it took to operate in this government is expressed in detail. The insight on how one could operate in such a regime and be successful in the construction and requisition projects that Speer was involved in. Some may fine these parts too detailed but they give us an insight on the inner workings of the regime.

As in all relationships his view of Hitler changed over time as did his view of the man. But a man is what we are shown through the eyes of the author. Though Speer admits that his country committed war crimes and he took responsibility for his part by accepting the sentence of twenty years he never apologized. As you read I feel he felt though he had a part that he was made a to pay the penalty for those who were either dead or escaped. To his credit at the end of WWII Speer did try and block some of Hitlers policy of total destruction of cities and infrastructure as the Third Reich collapsed around them.… (more)
LibraryThing member kaiser_matias
Speer's memoir of his life during the Third Reich is an extremely dull read. The first half, when he was only Hitler's architect, has him going over buildings in minute detail, with hardly anything else mentioned. When he becomes Minister of Armaments, he totally shifts interest to citing figures on production of material, and how he criticized the Reich leadership for their ineptitude in fighting the war. He spends copious amounts of time repeating that the various leaders and their infighting stalled production, and ruined Germany's chances for the war. He also spends a good portion of the book describing his meetings with Hitler. However, these were daily occurances, and Speer seems to want to recall every note and memorandum he sent to Hitler for his approval. Only at the end of the book when he describes his time post-Hitler and his captivity under the Allies is the book get interesting. Other than that, it is a rather dreary look at the Third Reich.… (more)
LibraryThing member Sturgeon
If you have the slightest interest in WW-II, you have to read this book.
LibraryThing member mr_pand
A recognised classic of autobiographical history, this account by Albert Speer about his life as Hitler's architect and armaments minister is indispensable to any history student of the period, as well as being a fascinating read, providing fresh insights to Nazi Germany by focusing in detail on many events outside of the much-repeated narratives of the Holocaust. Although quite long and perhaps overly-detailed in some places, definitely worth reading.… (more)
LibraryThing member Martin444
Extremely fascinating explanation of how an educated, apparently mild-mannered and humane German became indispensible to Hitler and the Holocaust by some kind of personal osmosis and how difficult it was to extricate himself from that system he had once admired yet always despised at least a little at some level.
LibraryThing member Schmerguls
1127 Inside the Third Reich Memoirs by Albert Speer (read 16 Sep 1971) I found these memoirs surprisingly interesting. Speer has the right attitude superficially, but right to the very end he worked for Hitler--and one wonders if he would have ever seen the right if Hitler had lived and won. It sounded very German; was very disorganized, but, all in all, the book was worthwhile.… (more)
LibraryThing member cpg
Ugly Printing

This is a review of the large paperback edition published by Ishi Press. The copyright page states: "Current Printing in June, 2009, Ishi Press in New York and Tokyo". In reality, what you'll receive is a beastly print-on-demand copy printed not in June 2009 but soon after you order it on some cheap digital printer in San Bernardino. This edition is roughly the same size as the 1970 hardback edition, but for some odd reason, this version has a 2-inch bottom margin, and the main text is printed in a much smaller font. Some pages look like bad photocopies. Sort of ironic that the memoirs of an artist like Speer are presented in such an unattractive way.

The smaller Simon and Schuster paperback edition can be had for less than a third of the price of the Ishi Press edition, and I can't imagine that it looks any worse. I suggest buying either it or a good used hardback edition if you can find one.… (more)
LibraryThing member everfresh1
Fascinating account of Nazi Germany and Hitler by a very interesting person. It's quite unique memoirs coming from somebody that was very close to Hitler circle. It's well written and seemingly honest - at least, until last chapters where Speer describes his altruistic actions and I am not sure whether I can believe him. The story of young architect getting in a few years to the height of power through dictator's benevolence and his own abilities is interesting by itself. Add to that the historical background, intimate details of Reich leaders and very close connection to Hitler, and it becomes essential reading for anybody interested in Third Reich history.… (more)
LibraryThing member Scorched_Earth
"Inside the Third Reich" is an inside account of Nazi Germany from one of Hitler's top aides and revered architect, Albert Speer. Speer is one of the few top Nazi officials who did not receive a death sentence or life sentence at Nuremberg. Instead, he received a 20 year prison term, which he made great use of by writing this elaborate and seemingly honest account of Germany's failed war effort.… (more)
LibraryThing member RoaldEuller
I was utterly fascinated when I read this as a teen, but over the years enough information about the "real" Speer has emerged that I am marking it down to 4 stars instead of 5. But worth it none-the-less.
LibraryThing member carterchristian1
This is an essential source of information on Hitler and World War II. Speer began as an architect for Hitler, himself absorbed with architecture from early manhood, who advanced to be head of all German war materials. The photographs - and they are plentiful - are testimony themselves to Speer's access to the German leader. He spent his 20 year in prison writing this memoir. Reviewers properly look for lapses and shading ot the truth, and it may well be there, but it is largely an accurate account.… (more)
Fewer

Speer : the final verdict by Joachim C. Fest
Adolf Hitler by John Toland
The Order of the Death's Head; the story of Hitler's S.S by Heinz Höhne
1889-1936 : hubris by Ian Kershaw
Hitlerland : American eyewitnesses to the Nazi rise to power by Andrew Nagorski
5 more
Hitler, 1936-1945 : nemesis by Ian Kershaw
The Anatomy of the Nuremberg Trials: A Personal Memoir by Telford Taylor
The Rising Sun: The Decline and Fall of the Japanese Empire, 1936-1945 by John Toland
Nuremberg diary by G. M. Gilbert
The coming of the Third Reich by Richard J. Evans
Fewer