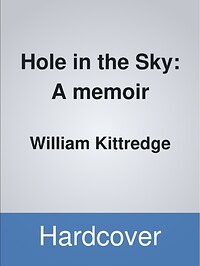 Hole in the Sky: A memoir

Health and Environment and Science

William Kittredge's stunning memoir is at once autobiography, a family chronicle, and a Westerner's settling of accounts with the land he grew up in. This is the story of a grandfather whose single-minded hunger for property won him a ranch the size of Delaware but estranged him from his family; of a father who farmed with tractors and drainage ditches but consorted with movie stars; and of Kittredge himself, who was raised by cowboys and saw them become obsolete, who floundered through three marriages, hard drinking, and madness before becoming a writer. Host hauntingly, Hole in the Sky is an honest reckoning of the American myth that drove generations of Americans westward -- and what became of their dream after they reached the edge.

inscribed by the author.

This house of sky : landscapes of a Western mind by Ivan Doig
Who Owns the West? by William Kittredge
Heart earth by Ivan Doig
Breaking Clean by Judy Blunt
Winter Brothers: A Season at the Edge of America by Ivan Doig
13 more
Homestead by Annick Smith
Where the bluebird sings to the lemonade springs : living and writing in the West by Wallace Earle Stegner
Bucking the Sun: A novel by Ivan Doig
English Creek by Ivan Doig
Growing Up Western: Recollections by Clarus Backes
Landscapes of promise : the Oregon story, 1800-1940 by William G. Robbins
Wallace Stegner : his life and work by Jackson J. Benson
The solace of open spaces by Gretel Ehrlich
My Story As Told By Water - Confessions, Druidic Rants, Reflections, Bird-watchings, Fish-stalkings, Visions, Songs... by David James Duncan
Mountain Time: A novel by Ivan Doig
The big sky by A. B. Guthrie
The sky fisherman by Craig Lesley
Beyond the hundredth meridian : John Wesley Powell and the second opening of the West by Wallace Earle Stegner
Fewer