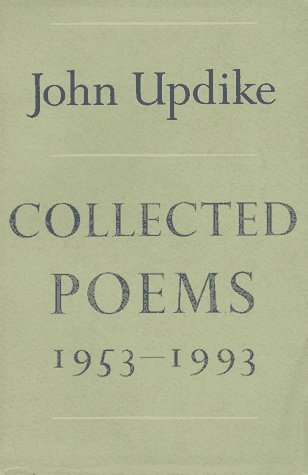 "The idea of verse, of poetry, has always, during forty years spent working primarily in prose, stood at my elbow, as a standing invitation to the highest kind of verbal exercise - the most satisfying, the most archaic, the most elusive of critical control. In hotel rooms and airplanes, on beaches and Sundays, at junctures of personal happiness or its opposite, poetry has comforted me with its hope of permanence, its packaging of flux." Thus John Updike writes in introducing his Collected Poems. The earliest poems here date from 1953, when Updike was twenty-one, and the last were written after he turned sixty. Over seventy have not been published before in book form. Most all of those published in his five previous collections are included, with some revisions. Arranged in chronological order, the poems constitute, as he says, "the thready backside of my life's fading tapestry." An ample set of notes at the back of the book discusses some of the hidden threads, and expatiates upon a number of fine points. Nature - tenderly intricate, ruthlessly impervious - is a constant and ambiguous presence in these poems, along with the social observation one would expect in a novelist. No occasion is too modest or too daily to excite metaphysical wonder, or to provoke a lyrical ingenuity of language. Yet even the wittiest of the poems are rooted to the ground of experience and fact. "Seven Odes to Seven Natural Processes" attempt to explicate the physical world with a directness seldom attempted in poetry. Several longer poems - "Leaving Church Early," "Mid-point"--Use autobiography to proclaim the basic strangeness of existence. Updike's light verse, relegated to a separate section, was his youthful forte, and led David McCord to write of him as "a graceful border-crosser (light verse to poem) as Auden has been." Indeed, even the lightest verses within their giddy wordplay echo his recurring notes of confession, nostalgia, anxiety, and awe.… (more)