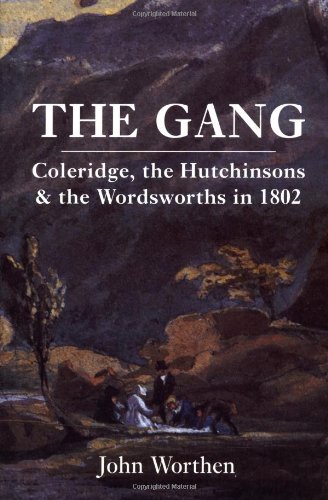 The Gang: Coleridge, the Hutchinsons & the Wordsworths in 1802

Publisher's description: Over a dramatic six-month period in 1802, William Wordsworth, S.T. Coleridge, Wordsworth's sister Dorothy, and the two Hutchinson sisters Sara and Mary formed a close-knit group whose members saw or wrote to one another constantly. Coleridge, whose marriage was collapsing, was in love with Sara, and Wordsworth was about to be married to Mary, who would be moving in beside Dorothy in their Grasmere cottage. Throughout this extraordinary period both poets worked on some of their finest and most familiar poems, Coleridge's Dejection: An Ode and Wordsworth's Immortality Ode. In this fascinating book, John Worthen recreates the group's intertwined lives and the effect they had on one another. Drawing on the group's surviving letters, and poems, as well as Dorothy's diaries, Worthen throws new light on many old problems. He examines the prehistory of the events of 1802, the dynamics of the group between March and July, the summer of 1802, when Wordsworth and Dorothy visited Calais to see his ex-mistress and his daughter Caroline, and the wedding between Wordsworth and Mary in October of that year. In an epilogue he looks forward to the ways in which relationships changed during 1803, concentrating on a single day--11 January 1803--in the lives of the group.… (more)