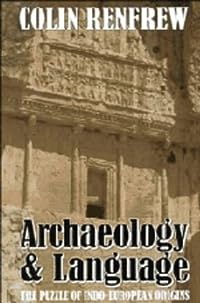 Archaeology and language : the puzzle of Indo-European origins

In this book Colin Renfrew directs remarkable new light on the links between archaeology and language, looking specifically at the puzzling similarities that are apparent across the Indo-European family of ancient languages, from Anatolia and Ancient Persia, across Europe and the Indian subcontinent, to regions as remote as Sinkiang in China. Professor Renfrew initiates an original synthesis between modern historical linguistics and the new archaeology of cultural process, boldly proclaiming that it is time to reconsider questions of language origins and what they imply about ethnic affiliation--issues seriously discredited by the racial theorists of the 1920s and 1930s and, as a result, largely neglected since. Challenging many familiar beliefs, he comes to a new and persuasive conclusion: that primitive forms of the Indo-European language were spoken across Europe some thousands of years earlier than has previously been assumed.… (more)

LibraryThing member tripleblessings
A controversial new theory on the spread of Indo-European languages. Suggests our language evolved among the first settled farmers of Anatolia around 7000 BC and spread gradually and peacefully from there through agriculture. (Not the traditional theories of mass migrations, conquests on a huge
Show More
scale.) Interesting arguments.
Show Less
1 more
LibraryThing member wickenden
Renfrew believes that the Indo-European languages spread from Anatolia into Europe (into Greece and beyond). He says it spread with the expansion of farming. Interesting.
Fewer

In search of the Indo-Europeans : language, archaeology, and myth by J. P. Mallory
The horse, the wheel, and language : how Bronze-Age riders from the Eurasian steppes shaped the modern world by David W. Anthony
Before civilization: the radiocarbon revolution and prehistoric Europe by Colin Renfrew
Ancestral journeys : the peopling of Europe from the first venturers to the Vikings by Jean Manco
The decipherment of Linear B by John Chadwick, 1920-
7 more
The Lost Civilizations of the Stone Age by Richard Rudgley
The great human diasporas : the history of diversity and evolution by L. L. (Luigi Luca) Cavalli-Sforza, 1922-
Runes: Cuneiform to the Alphabet (Reading the Past) by R. I. Page
In search of the Neanderthals : solving the puzzle of human origins by Chris Stringer
Forgotten scripts : their ongoing discovery and decipherment by Cyrus Herzl Gordon
The mummies of Urumchi by E. J. W. Barber
The Hittites and Their Contemporaries in Asia Minor (Ancient Peoples and Places Series, Vol. 83) by J. G. Macqueen
Fewer