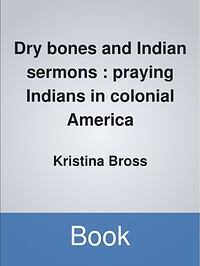 Native converts to Christianity, dubbed "praying Indians" by seventeenth-century English missionaries, have long been imagined as benign cultural intermediaries between English settlers and "savages." More recently, praying Indians have been dismissed as virtual inventions of the colonists: "good" Indians used to justify mistreatment of "bad" ones. In a new consideration of this religious encounter, Kristina Bross argues that colonists used depictions of praying Indians to create a vitally important role for themselves as messengers on an evangelical "errand into the wilderness" that promised divine significance not only for the colonists who had embarked on the errand, but also for their metropolitan sponsors in London. In Dry Bones and Indian Sermons, Bross traces the response to events such as the English civil wars and Restoration, New England's Antinomian Controversy, and "King Philip's" war. Whatever the figure's significance to English settlers, praying Indians such as Waban and Samuel Ponampam used their Christian identity to push for status and meaning in the colonial order. Through her focused attention to early evangelical literature and to that literature's historical and cultural contexts, Bross demonstrates how the people who inhabited, manipulated, and consumed the praying Indian identity found ways to use it for their own, disparate purposes.… (more)

Manitou and providence : Indians, Europeans, and the making of New England, 1500-1643 by Neal Salisbury
Native people of southern New England, 1650-1775 by Kathleen Joan Bragdon
Beyond 1492 : encounters in colonial North America by James Axtell
The invasion of America : Indians, colonialism, and the cant of conquest by Francis Jennings
Archaic societies : diversity and complexity across the midcontinent by Thomas E. Emerson
13 more
The Red King's rebellion : racial politics in New England, 1675-1678 by Russell Bourne
The Pequot War by Alfred A. Cave
The Indian great awakening : religion and the shaping of native cultures in early America by Linford D. Fisher
Northeastern Indian lives, 1632-1816 by Robert Steven Grumet
Kiva, cross & crown : the Pecos Indians and New Mexico, 1540-1840 by John L. Kessell
Cahokia Mounds: America's First City (Landmarks) by William Iseminger
After King Philip's War : presence and persistence in Indian New England by Colin G. Calloway
The Munsee Indians : a history by Robert Steven Grumet
The ambiguous Iroquois empire : the Covenant Chain confederation of Indian tribes with English colonies from its beginnings to the Lancaster Treaty of 1744 by Francis Jennings
Captives & cousins : slavery, kinship, and community in the Southwest borderlands by James Brooks, 1955-
The Western Abenakis of Vermont, 1600-1800 : war, migration, and the survival of an Indian people by Colin G. (Colin Gordon) Calloway, 1953-
Sixteenth-Century North America: The Land and the People As Seen by the Europeans by Carl Ortwin Sauer
Cultures in Contact: The Impact of European Contacts on Native American Cultural Institutions, A.D. 1000 (Anthropological Society of Washington Serie) by William W. Fitzhugh
Fewer