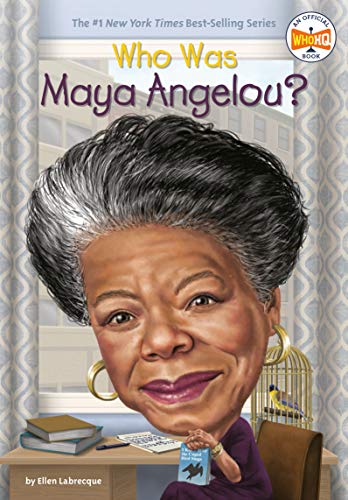 Who Was Maya Angelou?

Born in Missouri in 1928, Maya Angelou had a difficult childhood. Jim Crow laws segregated blacks and whites in the South. Her family life was unstable at times. But much like her poem, "Still I Rise," Angelou was able to lift herself out of her situation and flourish. She moved to California and became the first black and first female streetcar operator before following her interest in dance. She became a professional performer in her twenties and toured the U.S. and Europe as an opera star and calypso dancer. But Angelou's writing became her defining talent. Her poems and books, including "I Know Why the Caged Bird Sings," brought her international acclaim.

Women of Hope: African-Americans Who Made a Difference by Joyce Hansen
Who Is Gloria Steinem? (Who Was?) by Sarah Fabiny
Who Was Frederick Douglass? by April Jones Prince
Who Was Harriet Beecher Stowe? by Dana Meachen Rau
Who Is Malala Yousafzai? (Who Was?) by Dinah Brown
9 more
Who Was Beatrix Potter? by Sarah Fabiny
Who Was Frida Kahlo? by Sarah Fabiny
Who Was Milton Bradley? by Kirsten Anderson
Who Was Julia Child? by Geoff Edgers
Who Was Jesse Owens? by James Buckley Jr.
Langston Hughes: Young Black Poet (Childhood of Famous Americans) by Montrew Dunham
Dare to Dream: Coretta Scott King and the Civil Rights Movement (Rainbow Biography) by Angela Shelf Medearis
Who Was Clara Barton? by Stephanie Spinner
Who Is Barack Obama? (Who Was?) by Roberta Edwards
Fewer