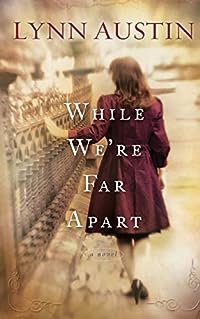 "In an unassuming apartment building in Brooklyn, New York, three lives intersect as the reality of war invades their lives. Young Esther is heartbroken when her father decides to enlist in the army shortly after the death of her mother. Penny Goodrich has been in love with Eddie Shaffer for as long as she can remember; now that Eddie's wife is dead, Penny feels that she's been given a second chance and offers to care for his children, hoping he will finally notice her and marry her after the war. And elderly Mr. Mendel, the landlord, waits for the war to end to hear what has happened to his son trapped in war-torn Hungary"--Cover, p. 2.

LibraryThing member Elentarien
A little dry, but interesting at the same time. I did find it hard to 'get attached', as often happens when a story is covering a long period of time like this. But all in all the concept was good, and the story was interesting. It was a nice read to watch the characters grow, and unfold as time went on.The romance aspect was rather understated, much to my disappointment. I do enjoy good romantic stories. But it had a happy ending, so it worked. Not one I would reread, but still good for a once-over.… (more)
3 more
LibraryThing member ForSix
There is a lot I want to say about this novel. First is if I had know it was faith-infused historical fiction, I wouldn't have read it. I downloaded this novel for two reasons: it was a Kindle freebie and it's set during World War II. When I started reading it, I didn't know the story would unfold the way it did. The next thing I want to say is good thing I didn't know what I was getting into because this was one of the best novels I read this year.

The novel begins when Eddie, widower and father of two children, enlists leaving his children in need of a guardian while he was away. To his surprise, slightly pathetic next door neighbor Penny - who is secretly in love with him - volunteers to watch them while he is away. I know I may be a little harsh on Penny by saying she's pathetic , but sadly it's true. She is the product of two overbearing parents who not only belittle her at every opportunity but are so protective she has no confidence in herself at all. One of the joys of this novel is watching Penny grow from an insecure girl to a mature woman. I absolutely disliked her in the beginning, she was mousy, needy and giving all at the same time. I was surprised to see how much she changed. More importantly, I thought her rebirth was completely believable.

Mainly the novel focuses on the life and relationships of Penny, the kids and Mr. Jacob Mendel, their landlord. I loved the time I spent getting to know Mr. Mendel. I do not know a lot about the Jewish faith. I also have never read a novel which focused on a father's point of view, waiting for news of his Jewish son in war stricken Hungary. It was so heartbreaking emotional. I think Ms. Austin did a beautiful job of making Mr. Mendel's heartache and grief so real to me. I also enjoying watching him heal from the loss of his wife and the uncertainty of his son's welfare.

As I said earlier, I wouldn't have read this novel if I knew it discussed faith. I think it didn't take anything away from the novel, in fact I think it added to it. I was moved by their struggles with God, and their spiritual reawakening.

Overall this novel was a great read and one I would have gladly paid for.… (more)
LibraryThing member debs4jc
I fell in love with the characters in this book as I experienced their triumphs and heartbreaks and spiritual pilgrimages. I was rooting for Penny Goodrich, hoping that she would overcome the horrible criticisms of her overprotective parents and learn to stand on her own two feet. I was heartbroken for Esther and Peter, the grandchildren of Penny's next door neighbor who are devastated when their father leaves them to join the army (the story is set during World War II). I was most touched by Mr. Mendel, however, Peter and Esther's Jewish landlord is suffering deeply from grief following the death of his wife. These characters are all brought together when Penny volunteers to watch the children while Eddie, their father, is away fighting in the war--since his wife died in an accident and the children's grandmother refuses to take them in. As the characters struggle with their hopes and dreams--for romance, for a lost son to be found they also begin to share their struggles with one another--especially Mr. Mendel, who doubts God (or Hashim, as he calls Him) after his wife's death but who hesitatingly starts to share his faith traditions with his neighbors. The characters end up going on a journey of healing together that results in a satisfying ending.
This book resonated with me, sometimes on a fairly deep level as I pondered Mr. Mendel's spiritual journey. Yet is had a lot of warmhearted scenes and it was fun to see Penny develop as a character as she gradually transformed from a woman afraid of her own shadow to a vibrant, independent young women. I heartily recommend it to fans of historical romances, especially if they enjoy books that get them thinking about issues of faith.… (more)
LibraryThing member HeatherLINC
3.5 stars

This novel was an enjoyable read set during WWII. It follows the story of Penny Goodrich and Jacob Mendel. At the start, Penny's lack of self-esteem annoyed me. She made assumptions that were wrong and refused to stand-up for herself, but I did like following her personal growth as she grew above her circumstances and became an independent woman.

However, I found elderly Jacob's story far more interesting as he struggled for news about his son in Hungary. The author gave an insight into what European Jews were facing from letters sent from Avi and his wife. Their plight was heart-wrenching.

A story of secrets, separation, friendship, forgiveness and faith, "While We're Far Apart" was an easy, predictable read showing the importance of family ties and trust.… (more)
Fewer