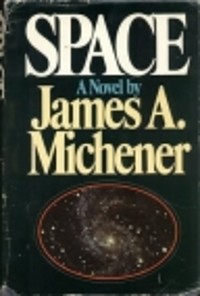 by James A. Michener

Already a renowned chronicler of the epic events of world history, James A. Michener tackles the most ambitious subject of his career: space, the last great frontier. This astounding novel brings to life the dreams and daring of countless men and women--people like Stanley Mott, the engineer whose irrepressible drive for knowledge places him at the center of the American exploration effort; Norman Grant, the war hero and U.S. senator who takes his personal battle not only to a nation, but to the heavens; Dieter Kolff, a German rocket scientist who once worked for the Nazis; Randy Claggett, the astronaut who meets his destiny on a mission to the far side of the moon; and Cynthia Rhee, the reporter whose determined crusade brings their story to a breathless world.   Praise for Space   "A master storyteller . . . Michener, by any standards, is a phenomenon. Space is one of his best books."--The Wall Street Journal   "A novel of very high adventure . . . a sympathetic, historically sound treatment of an important human endeavor that someday could be the stuff of myth, told here with gripping effect."--The New York Times Book Review   "Space is everything that Michener fans have come to expect. Without question, the space program's dramatic dimensions provide the stuff of great fiction."--BusinessWeek   "Michener is eloquent in describing the actual flights into space, as well as the blazing, apocalyptic re-entry of the shuttle into earth's atmosphere."--The New York Times… (more)

LibraryThing member BryanThomasS
Read this in high school and loved it. Michener's take on NASA and the space program. He invents a state in the middle of the US. The usual rich characterization. Not as good as Centennial but still a worthwhile read.
6 more
LibraryThing member santhony
One of Michener's better efforts. Historical fiction based upon the Space program.
LibraryThing member phaga
Historical fiction and I aren't the greatest of friends but occasionally we meet and dance and drink and have a good time, as was the case with Space. Michener does a damn good job of mixing history with fiction, I couldn't stop reading this.
LibraryThing member PMaranci
I'd never read any Michener before. For some reason I thought he was supposed to be a brilliant writer, one of the giants of American literature.

My mistake! Space was surprisingly dull, and not at all well-written. Simply put, it plodded. It's a fictionalized story of the space program, with some
Show More
references to some actual astronauts thrown in - plus a fictionalized US state, which was one of two things which stuck in my memory from the book.

The other thing was a rather nasty assessment of golden age science fiction writers, all of whom (I'm sorry to say) were more talented writers than Mr. Michener.

Space had the feel of one of those potboilers that sits on the New York Times best-seller list for many weeks...something written for the lowest common denominator. It wasn't awful, mind you, just dull and awkward. Shogun, which I'd put in the same general class of "giant best-sellers" is far better written than Space.
Show Less
LibraryThing member JBarringer
I loved some of Michener's other long books, so I figured this might be a fun read. Well, in fact this is one of the more boring space-oriented novels I've come across. In part, since it was written in the early 80's, and based on research Michener did in the 70's, there was only so much he could
Show More
write about that would touch space exploration and space science more directly. Still, this novel is really not about space so much as it is a drawn out, poorly paced, jumbled account of 6 early astronauts in NASA's moon landing program, with a bit about how NASA came to be, and a few other related threads, all of which could be so much more interesting than they turn out to be in this novel. In addition, the author's sympathy seems to be with the ultra-conservative characters he describes, making it hard for me, as a modern, female reader, to relate to the characters and their problems. Of course, bow, we have had female astronauts, and we've landed rovers on Mars that send us color photos of the surface daily, and we just had a Pluto flyby with photos. We also have still never landed another person on the moon yet since the program described in this book ended. The reasons why we 'doomed' ourselves to not have another moon landing are brought up in this novel, and there are other interesting themes and ideas throughout this book, but related in a rather mind-numbing manner that allows the reader to feel the ponderousness of this long book, one slow page at a time. It could have been worse, but this is not one of Micheners best books.
Show Less
LibraryThing member pre20cenbooks
Delightful historical fiction from beginning to end. Michener brought the issues and inner workings from early rockets to space shuttle to debates on evolution, the glam and the tragedy. This is a good read for NASA buffs.
LibraryThing member Razinha
Thick and thin... 800 pages thick but thin everywhere else. Michener didn't seem to know when to end the book, despite many opportunities. Still, I was always enthralled with the Apollo program and NASA, so the backdrop adds a star to the rating.

I wonder what Michener would have thought of some of
Show More
his more disturbing story elements coming true. The country heading backward into the dark ages, science losing to ignorance, NASA becoming inconsequential...sad.
Show Less
Fewer