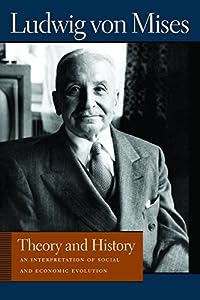 Theory and History: An Interpretation of Social and Economic Evolution

Ludwig von Mises was the leading exponent of the Austrian School of economics throughout most of the twentieth century. He has long been regarded as a most knowledgeable and respected economist, even though his teachings were generally outside the "mainstream." "Theory and History" is primarily a critique of Karl Marx, his materialism, and his prediction of the inevitability of socialism. Marx attributes the creation of tools and machines, as well as the economic structure of society, to undefined "material productive forces;" Mises rejects this materialistic view; he points out that tools and machines are actually created by individuals acting on the basis of non-materialistic ideas. This book discusses the theory of economics, i.e., the study of purposive human action, and with history, the record of the past actions of individuals. All actions are determined by ideas. Thoughts and ideas are "real things," Mises writes. "Although intangible and immaterial, they are factors in bringing about changes in the realm, of tangible and material things." Rather than rejecting the study of historical change as a "useless pastime," Mises considers it of the utmost practical importance. "History looks backward into the past, but the lesson it teaches concerns things to come." History opens the mind to an understanding of human nature, increases wisdom, and distinguishes civilized man from the barbarian. Moreover, historical knowledge is of the utmost importance in helping to anticipate and plan for the future. Though "Theory and History" may not be studied as often as other, more popular Mises works, it provides great insight into Mises's fundamental thoughts and is a fascinating exploration of human action. Ludwig von Mises (1881-1973) was the leading spokesman of the Austrian School of Economics throughout most of the twentieth century. He earned his doctorate in law and economics from the University of Vienna in 1906. In 1926, Mises founded the Austrian Institute for Business Cycle Research. From 1909 to 1934, he was an economist for the Vienna Chamber of Commerce. Before the "Anschluss," in 1934 Mises left for Geneva, where he was a professor at the Graduate Institute of International Studies until 1940, when he emigrated to New York City. From 1948 to 1969, he was a visiting professor at New York University.Bettina Bien Greaves is a former resident scholar, trustee, and longtime staff member of the Foundation for Economic Education. She has written and lectured extensively on topics of free market economics. Her articles have appeared in such journals as "Human Events, Reason, " and "The Freeman: Ideas on Liberty." A student of Mises, Greaves has become an expert on his work in particular and that of the Austrian School of economics in general. She has translated several Mises monographs, compiled an annotated bibliography of his work, and edited collections of papers by Mises and other members of the Austrian School.… (more)