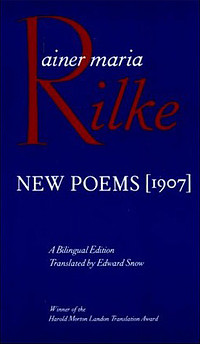 Other authorsEdward A. Snow (Translator)

Rainer Maria Rilke, the most famous (and important) German language poet of the twentieth century - a master to be ranked with Goethe and Heine - wrote 'The New Poems' of 1907 and 1908 in transition from his late-nineteenth-century style. They mark his appearance as a lyrical, metaphysical poet of the modernist sensibility, often using traditional forms like the sonnet to explore the inner essence, the deep heart, of things-often, quite literally, things. Influenced by his time spent as Rodin's secretary, Rilke turned to quotidian life and sought to artistically redeem it in all its possibilities. His exquisite use of meter and rhyme marks him as a "formalist" and yet a contemporary of Eliot and the later Yeats, so this translation follows, as closely as English allows, the formal properties of the original poems, in a line-for-line version, while trying to capture the spare diction and direct idioms of modernism. Translated by Len Krisak, who is a recipient of the Richard Wilbur, Robert Penn Warren, and Robert Frost prizes in poetry. He has published over 500 poems, including translations from the Latin, Greek, Spanish, Italian, Russian, and German.… (more)