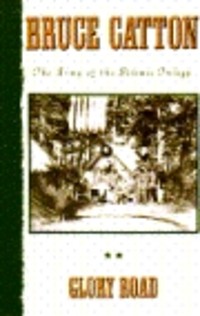 The Army of the Potomac (2)

The saga of a nation divided--from the Union Army's disaster at Fredericksburg to its triumph at Gettysburg--by a Pulitzer Prize-winning Civil War chronicler.   In the second book of the Army of the Potomac Trilogy, Bruce Catton--one of America's most honored Civil War historians--once again brings the great battles and the men who fought them to breathtaking life. As the War Between the States moved through its second bloody year, General Ambrose Burnside was selected by President Lincoln to replace the ineffectual George "Little Mac" McClellan as commander of the Union Army. But the hope that greeted Burnside's ascension was quickly dashed in December 1862 in the wake of his devastating defeat at Fredericksburg.   Following Burnside's exit, a mediocre new commander, Joseph "Fighting Joe" Hooker, turned a sure victory into tragedy at Chancellorsville, continuing the Union's woes and ensuring Robert E. Lee's greatest triumph of the war. But the tide began to turn over the course of three days in July 1863, when the Union won a decisive victory on the battlefield of Gettysburg. Months later, Lincoln would give his historic address on this ground, honoring the fallen soldiers and strengthening the Union Army's resolve to fight for a united and equal nation for all of its people.   With brilliant insight, color, and detail, Catton interweaves thrilling narratives of combat with remarkable portrayals of politics and life on the home front. Glory Road is a sweeping account of extraordinary bravery and shocking incompetence during what were arguably the war's darkest days.  … (more)

LibraryThing member Prop2gether
Fabulous reading of how the War began
2 more
LibraryThing member larryerick
In this second of his Army of the Potomac Trilogy, the author has smoothed out all the rough edges of his first volume, Mr. Lincoln's Army. His strengths in telling vignettes is maintained and spread out through more of the book. This is an embedded reporter's point of view. His battle descriptions
Show More
are more balanced as well, though they still suffer somewhat from ignoring certain key elements. Ultimately, it must be understood that this is a rather biased view of events in that it not only is covering the Army of the Potomac, and is, thus, leaving out -- I would say unnecessarily -- important aspects of what is happening on that army's opponent's side. It is also prone to embellish somewhat the part of its subject's actions. I can elaborate on both these points, by citing the Gettysburg battle. The author describes great efforts by the Union soldiers to avoid defeat. In many cases, barely hanging on by a thread, so to speak. Extraordinary efforts are painted in bright colors. And yet, there's not a word about all the criticism that has been laid on Confederate generals Ewell, Longstreet, and especially Stuart, for what they did NOT do, and maybe could have. Lack of action that, if the author is to be taken at face value, would most certainly have caused the Union army to be crushed. I appreciate that applauding the efforts of "your team", just as in sports, requires some positive comments, but barely winning a ball game can be viewed in a very different light when the opposing team is the best in the league and when it's against the junior varsity. This author had a choice to go for good public relations or good history, and he didn't always go for good history. Having said that, this is still a terrific read. Downright exciting at times. It's my own advanced knowledge of the subject that keeps me from giving it my highest rating.
Show Less
LibraryThing member 5hrdrive
Far superior to Mr.Lincoln's Army, this second chapter covers the Army of the Potomac from just after the Battle of Antietam through Fredericksburg, Chancellorsville, and on to the three days of Gettysburg. Nice counterpoint to Shelby Foote's The Civil War whose main focus is the Confederate side
Show More
of things, this brilliantly gives the account from the Union side.
Show Less
Fewer