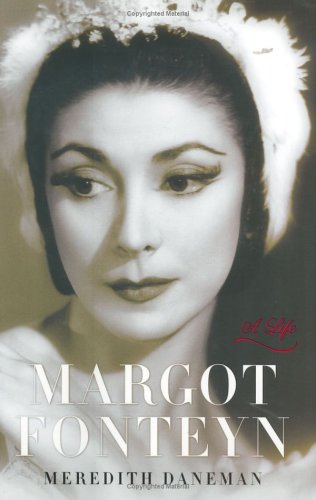 "The legend of Margot Fonteyn has touched every ballerina who has come after her and her genius endures in the memory of anyone who saw her dance. Yet until now, the complete story of her life has remained untold. Meredith Daneman, a novelist and herself a former dancer, reveals the fascinating story of Peggy Hookham, a little girl from suburban England who grew up to become a Dame of the British Empire and the most famous ballerina in the world. More than ten years of interviews and research, including exclusive access to Fonteyn's and her mother's never-before-seen diaries and letters, come together to create this definitive biography that sheds light on aspects of Fonteyn's life and career that have hitherto remained secret." "Fonteyn claimed to have had her first experience of flying when she was three years old, little knowing that she would be doing just that in front of audiences for most of her life. From the age of four, she devoted herself to the technique of ballet with a single-minded focus extraordinary in a young girl. Having a forceful, ambitious Irish/Latina mother helped, as did the fierce devotion and support of Ninette de Valois, the founder of the Sadler's Wells Ballet and Fonteyn's early champion. Through years of grueling training, Fonteyn would perfect her craft and fulfill her destiny, becoming England's beloved prima ballerina and enchanting audiences the world over with her legendary performances as Odette in Swan Lake, Stravinsky's Firebird and Princess Aurora in The Sleeping Beauty, the role that brought her celebrity in America." "As the author states in her introduction, Fonteyn's heart deeply colored her dancing and was as important a part of her success as her technique. Daneman explores Fonteyn's emotional life with a nuanced and perceptive understanding, including her intense connection to her mother, the "Black Queen"; her loves in bohemian thirties and forties London; her relationship with her balletic Svengali, Frederick Ashton; her affair with composer Constant Lambert and rumored affair with Rudolf Nureyev; and her final years in Panama with her beloved husband, Roberto Arias."--BOOK JACKET.… (more)

Choura: The Memoirs of Alexandra Danilova by Alexandra Danilova
Holding on to the air : an autobiography by Suzanne Farrell
Once a dancer-- by Allegra Kent
Secret muses : the life of Frederick Ashton by Julie Kavanagh
Nureyev, his life by Diane Solway
14 more
Nijinsky by Richard Buckle
Balanchine: a biography by Bernard Taper
Diaghilev's Ballets russes by Lynn Garafola
The Nureyev Image by Alexander Bland
George Balanchine: The Ballet Maker (Eminent Lives) by Robert Gottlieb
I remember Balanchine : recollections of a ballet master by those who knew him by Francis Mason
Perpetual motion : the public and private lives of Rudolf Nureyev by Otis Stuart
Dancing on my grave : an autobiography by Gelsey Kirkland
Balanchine's ballerinas : conversations with the Muses by Robert Tracy
Bronislava Nijinska--early memoirs by Bronislava Nijinska
Ballet Goer's Guide by Mary Clarke
Ballerina: The Art of Women in Classical Ballet by Mary Clarke
George Balanchine, ballet master : a biography by Richard Buckle
Dance is a contact sport by Joseph H. Mazo
Fewer