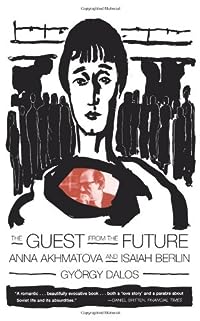 The guest from the future : Anna Akhmatova and Isaiah Berlin

In 1945 Isaiah Berlin, working in Russia for the British Foreign Office, met Anna Akhmatova almost by chance in what was then Leningrad. The brief time they spent together one long November evening was a transformng experience for both, and has become a cardinal moment in modern literary history. For Akhmatova, Berlin was a "guest from the future," her ideal reader outside the nightmare of Soviet life and a link with a lost Russian world; he became a figure in her cryptic masterpiece "Poem without a Hero." For Berlin, this "most memorable" meeting with the beautiful poet of genius was a spur to his ideas on liberty and on history. But there were tragic consequences: the Soviet authorities thought Berlin was a British spy, Akhmatova became a suspected enemy, and until her deathin 1966 the KGB persecuted her family. Though Akhmatova was convinced that she and Berlin had inadvertently started the Cold War, she remembered him gratefully and he inspired some of her finest poems. György Dalos--who inteviewed Berlin and many others who knew Akhmatova well, and who examined hitherto-secret KGB and Poliburo files--tells the inside story of how Stalin and other Soviet leaders dealt with Akhmatova. He ends with the touching story of her posthumous rehabilitation, when Russians astronomers discovered a new star and name it after her.… (more)