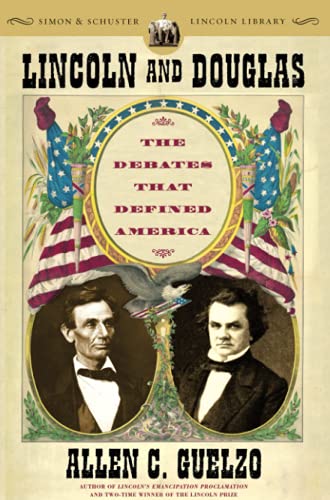 Lincoln and Douglas: The Debates That Defined America

What carried this one-term congressman from obscurity to fame was his Senate campaign against the country's most formidable politician, Stephen A. Douglas, in the summer and fall of 1858. Lincoln challenged Douglas directly in one of his greatest speeches--"A house divided against itself cannot stand"--and confronted Douglas on the questions of slavery and the inviolability of the Union in seven fierce debates. Of course, the great issue was slavery. Douglas was the champion of letting states and territories decide for themselves whether to legalize slavery. Lincoln drew a moral line, arguing that no majority could ever make slavery right. Lincoln lost that Senate race to Douglas, though he came close to toppling the "Little Giant," but he emerged a predominant national figure. Guelzo's book brings alive their debates and this whole year of campaigns, and underscores their centrality in the greatest conflict in American history.--From publisher description.… (more)

LibraryThing member estamm
Excellent book. I'm glad that the book didn't deal *exclusively* with the debates themselves. Instead, Guelzo brings in background information to help the reader understand some of the more esoteric references in the debates, as well as what was going on with Lincoln and Douglas before and after each debate. Ironically, I wish Guelzo had spent a bit more time examining each debate. However, I can't fault him too much for that: he certainly boiled each debate down to the essential basics.

I read the actual debates a few years ago. At the time, there were a number of things from the debates that I just didn't understand too well. I may have to go back and re-read them now that I have a better sense of the background for some of the topics.

In all, the book was well written. There were a few places where I found myself thinking it was a bit 'dry', but the latter chapters were quite interesting. If you want to know more about the debates (but don't want to actually wade through the transcripts of the debates), then this is the book for you.… (more)
2 more
LibraryThing member HistReader
Although somewhat tedious at times, Mr Guelzo's book not only offers firsthand accounts of the two Senatorial candidates, this work also sheds light on both men as people. Sprinkled throughout the book are tidbits of history, not necessarily related to the series of debates which crisscrossed the state, but are illustrative of the era and pertinent to the great debaters.

Mr Guelzo does not "rewrite" history to meet today's social standards; he has crafted a book painting each man as they were seen, not as we would like to view them in hindsight. Interestingly, the author includes a side-by-side chart comparing each debate listing each accusation or claim made by one man and if applicable, a refutation or denial. Think sports box scores!

The epitome of "inside politics," this book may not be interesting to the average reader who tires of political infighting. One thing it does prove: politics never change. Just as today, over a century ago, candidates played fast-and-loose with the facts, resorted to personal attacks and plied the electorate by exaggerating fears.

Originally reviewed BN.com November 29, 2010… (more)
LibraryThing member g33kgrrl
A very complete look at Lincoln & Douglas's debates. I very much appreciated getting the background stories, including the politics behind the debates. It made many things make more sense, including how Dred Scott fit into everything and also everyone's stances on the Civil War.

The only thing I didn't like was the very end of the epilogue; I felt it got a bit overblown. I was with Guelzo right up until about the last two pages when he tried to tie the Cold War and 9/11 into everything. I am ALL ABOUT how the past informs the present but it was ham-handed, the nuances are much more subtle. If you are doing your job right when writing a history book, your audience is already thinking these thoughts on their own.… (more)
Fewer