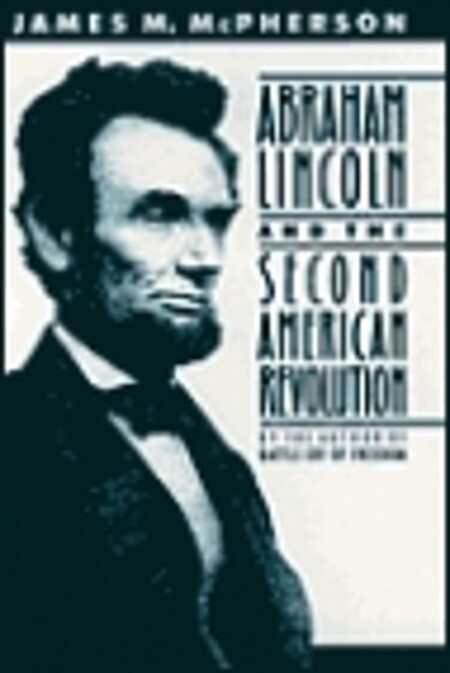 James McPherson has emerged as one of America's finest historians. Battle Cry of Freedom, his Pulitzer Prize-winning account of the Civil War, was a national bestseller that Hugh Brogan, in The New York Times Book Review, called "history writing of the highest order." In that volume,McPherson gathered in the broad sweep of events, the political, social, and cultural forces at work during the Civil War era. Now, in Abraham Lincoln and the Second American Revolution, he offers a series of thoughtful and engaging essays on aspects of Lincoln and the war that have rarely beendiscussed in depth.McPherson again displays his keen insight and sterling prose as he examines several critical themes in American history. He looks closely at the President's role as Commander-in-Chief of the Union forces, showing how Lincoln forged a national military strategy for victory. He explores theimportance of Lincoln's great rhetorical skills, uncovering how--through parables and figurative language--he was uniquely able to communicate both the purpose of the war and a new meaning of liberty to the people of the North. In another section, McPherson examines the Civil War as a SecondAmerican Revolution, describing how the Republican Congress elected in 1860 passed an astonishing blitz of new laws (rivaling the first hundred days of the New Deal), and how the war not only destroyed the social structure of the old South, but radically altered the balance of power in America,ending 70 years of Southern power in the national government.The Civil War was the single most transforming and defining experience in American history, and Abraham Lincoln remains the most important figure in the pantheon of our mythology. These graceful essays, written by one of America's leading historians, offer fresh and unusual perspectives onboth.… (more)

LibraryThing member kencf0618
Interesting legal analysis of the insurgency, which technically was nothing but a rather large riot. Lincoln never, ever referred to "the Confederacy," and for good reason, too!
1 more
LibraryThing member dougwood57
James McPherson (Battle Cry of Freedom) is the preeminent Civil War author and scholar of our time. The Princeton University professor provides fresh insight into A. Lincoln in these seven essays.

McPherson demonstrates conclusively that the Civil War was indeed the Second American Revolution - it abolished slavery and smashed the political, economic, and social status quo. Before the War, southerners dominated American politics - after the war it was decades before a son of the south could be elected President. The absence of the south from the national legislature during the war allowed the passage of the great progressive and modernizing legislation; the Homestead Act, enabled a continental railroad, and land-grant colleges. After the war, blacks made great (if far from complete) progress in education, politics, and economics.

Unfortunately, the reactionary forces led a counter-revolution that attempted to turn back the massive changes in society with much success. That counter-revolution eventually yielded to a Second Reconstruction in the mid-20th century.

McPherson repeatedly returns to Lincoln's political evolution as the War changed from a limited war for limited ends to a total war for revolutionary ends. In the end Lincoln insisted on unconditional surrender.

I particularly enjoyed the essays entitled 'How Lincoln Won the War with Metaphors', which contrasts the communication abilities of Lincoln and Jefferson Davis, and 'The Hedgehog and the Foxes', in which McPherson favors us with a description of Lincoln as the single-minded hedgehog outlasting the multifarious foxes such as Horace Greeley and William Seward.

My only small quibble is that similar points are made using the same quotes in multiple essays (perhaps unavoidable in a collection of previously published essays), but the quotes are so evocative of Lincoln's thinking that the repetition is not only forgiven, but enjoyed.

Highly recommended for anyone interested in US history, Lincoln, or the Civil War era.… (more)
Fewer