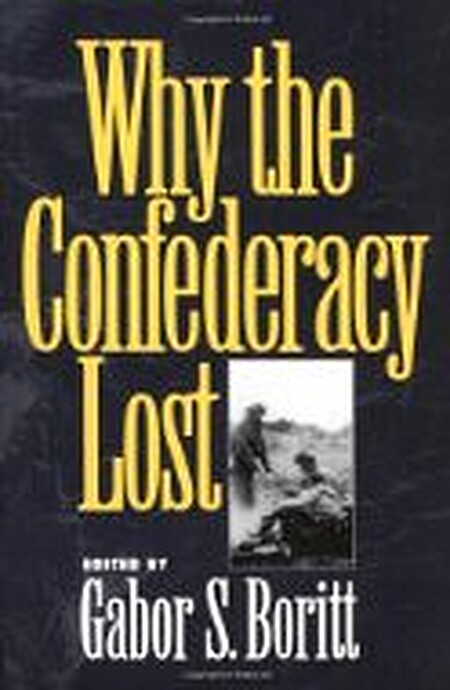 Why the Confederacy Lost

After the Civil War, someone asked General Pickett why the Battle of Gettysburg had been lost: Was it Lee's error in taking the offensive, the tardiness of Ewell and Early, or Longstreet's hesitation in attacking? Pickett scratched his head and replied, "I've always thought the Yankees hadsomething to do with it." This simple fact, writes James McPherson, has escaped a generation of historians who have looked to faulty morale, population, economics, and dissent as the causes of Confederate failure. These were all factors, he writes, but the Civil War was still a war--won by theUnion army through key victories at key moments.With this brilliant review of how historians have explained the Southern defeat, McPherson opens a fascinating account by several leading historians of how the Union broke the Confederate rebellion. In every chapter, the military struggle takes center stage, as the authors reveal howbattlefield decisions shaped the very forces that many scholars (putting the cart before the horse) claim determined the outcome of the war. Archer Jones examines the strategy of the two sides, showing how each had to match its military planning to political necessity. Lee raided north of thePotomac with one eye on European recognition and the other on Northern public opinion--but his inevitable retreats looked like failure to the Southern public. The North, however, developed a strategy of deep raids that was extremely effective because it served a valuable political as well asmilitary purpose, shattering Southern morale by tearing up the interior. Gary Gallagher takes a hard look at the role of generals, narrowing his focus to the crucial triumvirate of Lee, Grant, and Sherman, who towered above the others. Lee's aggressiveness may have been costly, but he well knewthe political impact of his spectacular victories; Grant and Sherman, meanwhile, were the first Union generals to fully harness Northern resources and carry out coordinated campaigns. Reid Mitchell shows how the Union's advantage in numbers was enhanced by a dedication and perseverance of federaltroops that was not matched by the Confederates after their home front began to collapse. And Joseph Glatthaar examines black troops, whose role is entering the realm of national myth.In 1960, there appeared a collection of essays by major historians, entitled Why the North Won the Civil War, edited by David Donald; it is now in its twenty-sixth printing, having sold well over 100,000 copies. Why the Confederacy Lost provides a parallel volume, written by today's leadingauthorities. Provocatively argued and engagingly written, this work reminds us that the hard-won triumph of the North was far from inevitable.… (more)

This book did a lot to make me re-evaluate my opinions on whether or not the South would have won if they'd had the same resources as the North. According to the essays, the Confederate states lost the war because the Union had key victories, dedicated troops, African Americans, military planning/political necessity, and better generals. And considering my inherent stubbornness, any book that makes me rethink my opinions on anything is worth note. All five writers present their point well, and they all back them up with solid facts. My one quibble has to do with the fact that the overall point of each essay seems to overlap with the others, and by the fifth essay, Glatthaar's "Black Glory," it was all redundant.

I would recommend this book to those who are interested in learning a little more about some of the specifics of the Civil War and its outcome.… (more)
1 more
LibraryThing member la2bkk
Thought provoking collection of essays setting forth the various writers' opinion as to the myriad causes of why the confederacy lost, or why the union won, the civil war. The essays are written in a manner that will appeal both to a casual reader and more serious civil war fan.
Fewer