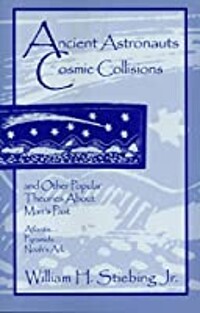 Ancient astronauts, cosmic collisions, and other popular theories about man's past

Controversial archaeological and astronomical "discoveries" have been the subject of countless news stories, best-selling books, movies, and television programs. Promoted (but seldom critically evaluated) are the theories that markings in the desert of Peru are the remains of an ancient airfield used by space visitors, that the Great Pyramid of Giza in Egypt exhibits advanced technology unknown to the ancient Egyptians, and that there were near-collisions between planets of our solar system in historical times. This book critically evaluates many of these popular hypotheses about man's early history. It presents the most important evidence and arguments for and against theories of a universal flood, the lost continent of Atlantis, mysterious pyramid powers, pre-Columbian voyages to America by ancient Egyptians and Phoenicians, and Velikovsky's cosmic catastrophism. Professor Stiebing stresses the need for careful and objective analysis of the "evidence" used to support radical reconstructions of the past. The book discusses radio-carbon dating, archaeological stratigraphy, textual interpretation, and epigraphy as well as emphasis on the proper use of data provided by geology, astronomy and other sciences. It is written in non-technical language and will appeal to a wide audience.… (more)

Worlds in Collision by Immanuel Velikovsky
When time began by Zecharia Sitchin
The Sirius Mystery: New Scientific Evidence of Alien Contact 5,000 Years Ago by Robert Temple
Lines to the mountain gods : Nazca and the mysteries of Peru by Evan Hadingham
Earth Lights Revelation: Ufo's and Mystery Lightform Phenomena : The Earth's Secret Energy Force by Paul Devereux
8 more
On Stonehenge by Sir. Fred Hoyle
Voyages of the Pyramid Builders: The True Origins of the Pyramids from Lost Egypt to Ancient America by Robert M. Schoch
Maps of the ancient sea kings; evidence of advanced civilization in the ice age. by Charles H. Hapgood
The Cygnus mystery : unlocking the ancient secret of life's origins in the cosmos by Andrew Collins, 1957-
Mysteries from Forgotten Worlds by Charles Berlitz
Echoes of the ancient skies : the astronomy of lost civilizations by E. C. Krupp
Voices of the rocks : a scientist looks at catastrophes and ancient civilizations by Robert M. Schoch
We Are Not the First: Riddles of Ancient Science by Andrew Tomas
Fewer