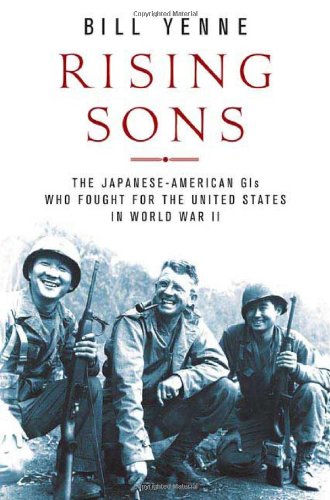 Rising sons : the Japanese American GIs who fought for the United States in World War II

Despite the fact that they and their families had been forced into internment camps, thousands of the American sons of Japanese immigrants responded by volunteering to serve in the United States armed forces during World War II. As military historian Bill Yenne writes, "It was their country, and they wanted to serve, just like anyone else their age. These young Japanese Americans thought of themselves as Americans, and they wanted to prove it."Most of these young Japanese Americans served in the 442nd Regimental Combat Team and its component 100th Infantry Battalion. For its size and length of service, the 442nd was the most decorated in the history of the US Army. The Japanese American GIs of the 442nd eventually earned 21 Medals of Honor and 9,486 Purple Hearts, while their outfit was awarded eight Presidential Unit Citations. "Rising Sons" brings to light the stories of these young men who faced down discrimination to serve their country. Some of these sons of Japanese immigrants came from Hawaii, where they had witnessed the attack on Pearl Harbor firsthand, and responded like most Americans by signing up to serve. Most of the Japanese-Americans served in Italy and France, in the terrible and difficult battles at Anzio and Cassino, in the Vosges Mountains and on the Gothic Line. Detached from the regiment for service in southern Germany, the 442nd's artillery battalion had the ironic distinction of being one of the American units involved in the liberation of Dachau. Japanese-Americans also proved themselves invaluable in the Pacific as well, serving in the Military Intelligence Service or in the infamous special-ops commando team known as Merrill's Marauders. Weaving together impeccable research with vivid firsthand accounts from surviving veterans, Yenne recounts the incredible stories of the Japanese-American soldiers who fought so bravely in World War II, men who were willing to lay down their lives for a country they were uncertain would ever accept them again. Their courageous actions proved that they, too, were true members of America's Greatest Generation.… (more)