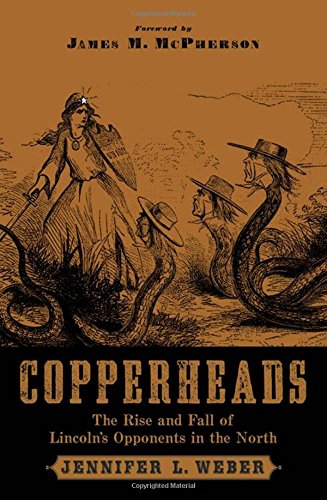 Copperheads: The Rise and Fall of Lincoln's Opponents in the North

The Northern home-front during the Civil War was far from tranquil. Fierce political debates set communities on edge, spurred secret plots against the Union, and triggered widespread violence. At the heart of all this turmoil stood the anti-war Democrats, nicknamed "Copperheads." Now, Jennifer L. Weber offers the first full-length portrait of this powerful faction to appear in almost half a century. Weber reveals how the Copperheads came perilously close to defeating Lincoln and ending the war in the South's favor. Indeed, by the summer of 1864, they had grown so strong that Lincoln himself thought his defeat was "exceedingly likely." Passionate defenders of civil liberties and states' rights--and often virulent racists--the Copperheads deplored Lincoln's suspension of habeas corpus, his liberal interpretation of the Constitution, and, most vehemently, his moves toward emancipation. Weber reveals how the battle over these issues grew so heated that Northerners feared their neighbors would destroy their livestock, burn their homes, even kill them. And she illuminates the role of Union soldiers, who, furious at Copperhead attacks on the war effort, moved firmly behind Lincoln. The soldiers' support for the embattled president kept him alive politically in his darkest times, and their victories on the battlefield secured his re-election. Packed with sharp observation and fresh interpretations, Copperheads is a gripping account of the fierce dissent that Lincoln called "the fire in the rear."… (more)

LibraryThing member Tess_W
It could have been a good topic. I think the publisher told the writer you must have 350 pages. The story could have been told in about 175 pages without the rambling and often repeated material. I've read much better on the subject. It did have alot of information from original sources, which were documented. This was so slow and boring that I only finished 50% of it and that was a herculean task.… (more)
1 more
LibraryThing member Shrike58
It would seem inevitable that any work on the "Copperheads" would have a revisionist slant. Where Frank Klement downplayed the insurrectionist nature of the movement, Weber tends to depict the hardcore among the faction as talking a good line in terms of exploiting the violence in the Federal states generated by the old social order being hammered in the course of the war, except when the time came to take organized action and the nerve failed. The impression left is that of just another in a series of reactionary American political irruptions that have turned out to be glorified acting out more than anything else, except for the victims of the resulting terrorist actions incited.

Where it's possible that the author did herself no favors is in terms of how she structures her monograph, which tends to ploddingly link the ebb and flow of the Peace Democrats and the Copperheads (who are not quite synonymous) with the fortunes of the Lincoln Administration on the battlefield. This is fine so far as it goes, but playing up issues such as the pre-war fraying of the Jacksonian White Male Order, the perceived hostility between Abolitionists and the Catholic immigrant communities, and sectionalism in the Old Northwest might have said more about the potential of the Copperheads as a political party. This is assuming that more dynamic leadership had been available than the ilk of Clement Vallandigham, who in these pages very much comes off as a legend in his own mind.… (more)
Fewer

The great triumvirate : Webster, Clay, and Calhoun by Merrill D. Peterson
Lincoln's Emancipation Proclamation : The End of Slavery in America by Allen C. Guelzo
Year of meteors : Stephen Douglas, Abraham Lincoln, and the election that brought on the Civil War by Douglas R. Egerton
The Fate of Liberty: Abraham Lincoln and Civil Liberties by Mark E. Neely
Lincoln president-elect : Abraham Lincoln and the great secession winter 1860-1861 by Harold Holzer
3 more
Lincoln and Douglas: The Debates That Defined America by Allen C. Guelzo
Lincoln at Cooper Union: The Speech That Made Abraham Lincoln President by Harold Holzer
The Reconstruction presidents by Brooks D. Simpson
Fewer