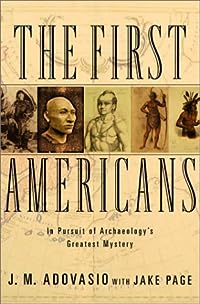 The first Americans : in pursuit of archaeology's greatest mystery

J. M. Adovasio has spent the last thirty years at the center of one of our most fiery scientific debates: Who were the first humans in the Americas, and how and when did they get there? At its heart, The First Americans is the story of the revolution in thinking that Adovasio and his fellow archaeologists have brought about, and the firestorm it has ignited. As he writes, “The work of lifetimes has been put at risk, reputations have been damaged, an astounding amount of silliness and even profound stupidity has been taken as serious thought, and always lurking in the background of all the argumentation and gnashing of tenets has been the question of whether the field of archaeology can ever be pursued as a science.”

LibraryThing member scvlad
So, a while back I read 1491 which dipped into new findings in various aspects of pre-columbian American history. It was very interesting. This was kind of a follow-up. It deals with one of the areas covered in 1491, namely the question of when humans arrived in the Americas. Adovasio is an
Show More
archaeologist who was responsible for the dig at Meadowcroft, an incredibly important site that provided the first solid evidence that humans inhabited N. America before 'Clovis man', i.e. prior to about 11,000 years ago. This book is his version of American archaeology leading up to this discovery, and how it and other similar digs has changed how we look at American pre-history.

This is Adovasio's personal story, as his and other recent finds generated a lot of controversy and heat from 'Clovis first' nay-sayers who firmly believed that humans could not been here prior to 11,000 years ago, and Adovasio doesn't mince many words in his opinions of them. Not that he should; I think it's clear that a lot of criticism of him and his work was very much undeserved and rooted in dogma rather than good science. And from this point of view it's a successful book. In between his obvious irritation, which is really only present in a couple of chapters, he successfully describes the history of American archaeology over the last two centuries and traces what it is we know, and how we got to knowing it. And he discusses the controversies that have raged over this entire time and how they eventually became resolved, including the one he was personally involved in.

A book for those with an interest in pre-history and in finding out how science is really done.
Show Less

The great journey : the peopling of ancient America by Brian M. Fagan
Ancient North America : the archaeology of a continent by Brian M. Fagan
First peoples in a new world : colonizing ice age America by David J. Meltzer
Bones, boats & bison : archeology and the first colonization of western North America by E. James Dixon
Skull wars : Kennewick Man, archaeology, and the battle for Native American identity by David Hurst Thomas
30 more
Prehistory of the Americas by Stuart J. Fiedel
Across Atlantic ice : the origin of America's Clovis culture by Dennis J. Stanford
The first Americans : the Pleistocene colonization of the New World
Bones : discovering the first Americans by Elaine Dewar
The archaeology of North America by Dean R. Snow
A history of American archaeology by Gordon Randolph Willey, 1913-
Exploring Native North America by David Hurst Thomas
The Moundbuilders : ancient peoples of eastern North America by George R. Milner
Ancient peoples of the American Southwest by Stephen Plog
Early man in the New World. by Kenneth Macgowan, 1888-1963
Lost world : rewriting prehistory : how new science is tracing America's Ice Age mariners by Tom Koppel
The mound builders by Robert Silverberg
Method and Theory in American Archaeology (Classics Southeast Archaeology) by Gordon R. Willey
Cahokia : ancient America's great city on the Mississippi by Timothy R. Pauketat
Kennewick Man : the scientific investigation of an ancient American skeleton by Kennewick Man (2014)
Paleoamerican origins : beyond Clovis by Robson Bonnichsen
Between the lines : the mystery of the giant ground drawings of ancient Nasca, Peru by Anthony F. Aveni
Ancient encounters : Kennewick Man and the first Americans by James C. Chatters
Anasazi Ancient People of the Rock by David Muench
Chronicle of the Maya kings and queens : deciphering the dynasties of the ancient Maya by Simon Martin
Archaeology of Precolumbian Florida by Jerald T. Milanich
The ancient civilizations of Peru by John Alden Mason
New perspectives on the first Americans by Bradley Thomas Lepper
Picture rocks : American Indian rock art in the Northeast woodlands by Edward J. Lenik, 1932-
Historical archaeology : a guide to substantive and theoretical contributions by Robert L. Schuyler
The Incas and their ancestors : the archaeology of Peru by Michael Edward Moseley
Mysteries of the Ancient Americas: The New World Before Columbus by Robert Dolezal
Mounds for the dead: an analysis of the Adena culture. by Don W. Dragoo
Geographical information systems in archaeology by James Conolly, 1968-
Field methods in archaeology by Thomas R. Hester
Fewer