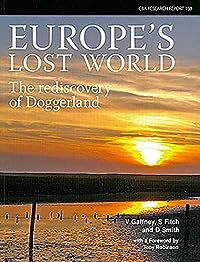 This excellent book, which deserves a wide readership, reports on the work of the North Sea Palaeolandscapes Project, which has been researching the fascinating lost landscape of Doggerland which until after the end of the last Ice Age connected Britain to the continent in the North Sea area. It aims to make the findings available to a general readership, and show just how impressive they have been, with nearly 23,000km2 mapped. The techniques used to reconstruct the landscape are explained, and conclusions and speculation about the climate and vegetation of the area in the Mesolithic offered. It also tells the story of the rediscovery of Doggerland, and the Mesolithic landscape more generally, from the pioneering work of Clement Reid in the nineteenth century, to the research of Grahame Clark and Bryony Coles in the twentieth. It's also worth pointing out just how well produced and illustrated the book is, and one can only hope that it can spark public interest in a comparatively little known phase of our prehistory.… (more)

After the Ice: A Global Human History 20,000-5000 BC by Steven Mithen
The standing stones of Europe : a guide to the great megalithic monuments by Alastair Service
The modern antiquarian : a pre-millennial odyssey through megalithic Britain : including a gazetteer to over 300 prehistoric sites by Julian Cope
Climate change in prehistory : the end of the reign of chaos by William James Burroughs
The significance of monuments : on the shaping of human experience in Neolithic and Bronze Age Europe by Richard Bradley, 1946-
16 more
An archaeology of natural places by Richard Bradley, 1946-
After the Ice Age : the return of life to glaciated North America by E. C. Pielou, 1924-
Prehistoric Avebury by Aubrey Burl
The origins of the British : a genetic detective story : the surprising roots of the English, Irish, Scottish and Welsh by Stephen Oppenheimer
The mind in the cave : consciousness and the origins of art by J. David Lewis-Williams
Ancestral journeys : the peopling of Europe from the first venturers to the Vikings by Jean Manco
Across Atlantic ice : the origin of America's Clovis culture by Dennis J. Stanford
The horse, the wheel, and language : how Bronze-Age riders from the Eurasian steppes shaped the modern world by David W. Anthony
Newgrange : archaeology, art, and legend by Michael J. O'Kelly
Stepping-Stones: A Journey through the Ice Age Caves of the Dordogne by Christine Desdemaines-Hugon
Prehistoric Britain by Timothy Darvill
Mammoth: The Resurrection Of An Ice Age Giant by Richard Stone
The Last Lost World: Ice Ages, Human Origins, and the Invention of the Pleistocene by Lydia V. Pyne
The Lost Civilizations of the Stone Age by Richard Rudgley
Secrets of the Ice Age : the world of the cave artists by Evan Hadingham
Megaliths, myths, and men: An introduction to astro-archaeology (Harper colophon books, CN 578) by Peter Lancaster Brown
Fewer