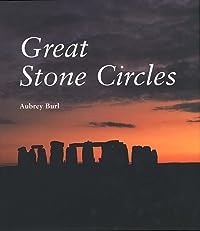 Thousands of years ago, people in Britain painstakingly arranged huge blocks of stone into careful circles. The most famous of these rings is Stonehenge, but elsewhere in England there are remains of other awe-inspiring prehistoric stone circles as well. For those who are enthralled by these enigmatic rings, this book offers fascinating explanations of their many mysteries. Archaeologist Aubrey Burl, for more than thirty years a specialist in the study of stone circles, selects a dozen attractive and evocative rings to illuminate particular archaeological questions--the purpose of stone circles, their construction, age, design, distribution, art, legends, and relation to astronomy. Burl investigates the legends that surround the Rollright Stones of Oxfordshire, for example, and finds that stories of girls turning to stone and of stones going for a midnight drink in the river are mainly fables of the eighteenth century or later. At Stanton Drew near Bristol, three rings provide a vivid example of prehistoric landscaping. Burl offers sometimes surprising answers to questions about Stonehenge: how were its bluestones transported from southwest Wales, why was its Slaughter Stone not used for sacrifice, and why is Stonehenge--the most British of stone circles--not a stone circle and not British? Burl concludes by reconstructing the social history of Swinside in the Lake District, describing the builders, their way of life, and the ceremonies they performed inside their lovely ring.… (more)

The modern antiquarian : a pre-millennial odyssey through megalithic Britain : including a gazetteer to over 300 prehistoric sites by Julian Cope
The Avebury cycle by Michael Dames
From Carnac to Callanish : the prehistoric stone rows and avenues of Britain, Ireland, and Brittany by Aubrey Burl
Prehistoric stone circles by Aubrey Burl
A guide to the Stone Circles of Britain, Ireland, and Brittany by Aubrey Burl
18 more
Newgrange : archaeology, art, and legend by Michael J. O'Kelly
The megalithic monuments of Britain and Ireland by Christopher Scarre
Stonehenge by Robin Heath
The Silbury treasure : the great goddess rediscovered by Michael Dames
Prehistoric astronomy and ritual by Aubrey Burl
Prehistoric Avebury by Aubrey Burl
Megaliths, myths, and men: An introduction to astro-archaeology (Harper colophon books, CN 578) by Peter Lancaster Brown
The Lost Civilizations of the Stone Age by Richard Rudgley
Earth magic by Francis Hitching
The stone circles of the British Isles by Aubrey Burl
Stonehenge decoded by Gerald S. Hawkins
Circles and Standing Stones: An Illustrated Exploration of Megalith Mysteries of Early Britain by Evan Hadingham
Ancient Britain by James Dyer
Megalithic sites in Britain, by A. (Alexander) Thom
The standing stones of Europe : a guide to the great megalithic monuments by Alastair Service
Rings of stone : the prehistoric stone circles of Britain and Ireland by Aubrey Burl
Heaven's mirror : quest for the lost civilization by Graham Hancock
Strange Artifacts A Sourcebook on Ancient Man Volume M-1 by William R. Corliss
Fewer