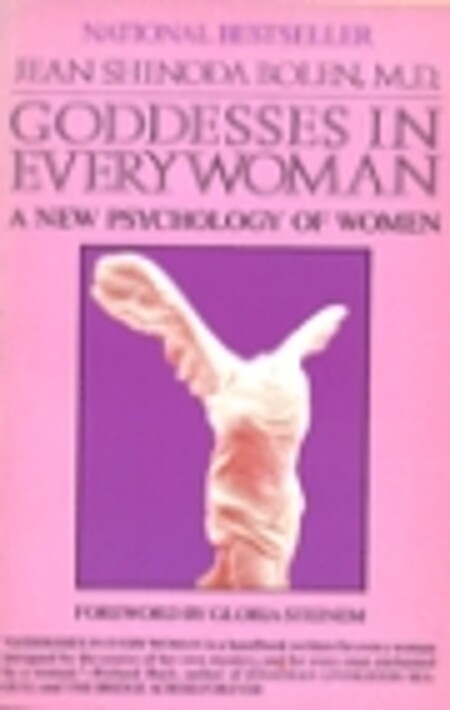 Goddesses in everywoman : a new psychology of women

Psychoanalyst Jean Bolen's career soared in the early 1980s when Goddesses in Everywoman was published. Thousands of women readers became fascinated with identifying their own inner goddesses and using these archetypes to guide themselves to greater self–esteem, creativity, and happiness.

Bolen's radical idea was that just as women used to be unconscious of the powerful effects that cultural stereotypes had on them, they were also unconscious of powerful archetypal forces within them that influence what they do and how they feel, and which account for major differences among them. Bolen believes that an understanding of these inner patterns and their interrelationships offers reassuring, true–to–life alternatives that take women far beyond such restrictive dichotomies as masculine/feminine, mother/lover, careerist/housewife. And she demonstrates in this book how understanding them can provide the key to self–knowledge and wholeness.

Dr. Bolen introduced these patterns in the guise of seven archetypal goddesses, or personality types, with whom all women could identify, from the autonomous Artemis and the cool Athena to the nurturing Demeter and the creative Aphrodite, and explains how to decide which to cultivate and which to overcome, and how to tap the power of these enduring archetypes to become a better "heroine" in one's own life story.

LibraryThing member rbtwinky
Every woman who has ever had any interest in psychology or mythology must read this book. It is excellent! Bolen unlocks the secrets behind the Greek myths and shows us that those goddesses are alive within each of us. And she does it in a way that is useful and insightful.

The foundation of the book is that mythology, in all its manifestations, is a representation of universal truth. Commonalities across cultures that had no interaction show that they come from a place that is common to all human experience, regardless of situation, culture, or influence.

Bolen focuses on the Greek Goddesses as archetypes for female behavior. The jealous wife as Hera, the focused Artemis, etc. But what is so great about these archetypes is that Bolen shows the strengths, weaknesses, and opportunities in each. She shows how they work together, how they conflict, and how to mediate between.

My only real struggle with the book is that I felt Bolen was a bit biased against some and towards others of the archetypes. She is clearly a strong Artemis, and tends to speak of Artemis in glowing terms. Persephone, Athena, and Hera don't fare nearly as well. I suspect this comes from her experience as a psychiatrist and seeing those types suffer more than others. That doesn't excuse devaluing those goddess types, though.

I can't speak highly enough of this book. If you haven't read it, go out and get it. If you have, pick up your copy and give it another go. Amazing!… (more)
5 more
LibraryThing member PamelaWells
"Archetypes are a powerful tool for self-knowledge because they tap into the universal collective language we all share. Learning to become more aware of your own archetypes can help you see yourself, the bigger picture and is a good place to start creating solutions for yourself and others. This book is for women."
LibraryThing member sarahinfla
another excellent book by a well-known Jungian analyst.
LibraryThing member ritaer
Greek goddesses as archetypes of female behavior in Jungian framework
LibraryThing member TS_Simons
This is essential reading for all women. Understanding the different archetypes has aided me time and again to learn why other women are motivated in ways I don't understand. I have owned this for more than ten years and still love it.
LibraryThing member Tim_Kavi
Dr. Bolen introduced these patterns in the guise of seven archetypal goddesses, or personality types, with whom all women could identify, from the autonomous Artemis and the cool Athena to the nurturing Demeter and the creative Aphrodite, and explains how to decide which to cultivate and which to overcome, and how to tap the power of these enduring archetypes to become a better "heroine" in one's own life story.… (more)
Fewer

The goddess within : a guide to the eternal myths that shape women's lives by Jennifer Barker Woolger
Women who run with the wolves : myths and stories of the wild woman archetype by Clarissa Pinkola Estés
The goddess : mythological images of the feminine by Christine Downing
Gods in everyman : archetypes that shape men's lives by Jean Shinoda Bolen
Goddesses in older women : archetypes in women over fifty by Jean Shinoda Bolen
28 more
Descent to the Goddess : a way of initiation for women by Sylvia Brinton Perera
Leaving my father's house : a journey to conscious femininity by Marion Woodman
Pagan meditations : the worlds of Aphrodite, Artemis, and Hestia by Ginette Paris
The pregnant virgin : a process of psychological transformation by Marion Woodman
Woman's mysteries, ancient and modern : a psychological interpretation of the feminine principle as portrayed in myth, story, and dreams by M. Esther Harding
Return of the goddess by Edward C. Whitmont
Crossing to Avalon : a woman's midlife pilgrimage by Jean Shinoda Bolen
Knowing woman: a feminine psychology by Irene Claremont de Castillejo
Addiction to perfection : the still unravished bride : a psychological study by Marion Woodman
Lost goddesses of early Greece : a collection of pre-Hellenic myths : with a new preface by Charlene Spretnak
The way of all women : a psychological interpretation by M. Esther Harding
The chalice and the blade : our history, our future by Riane Tennenhaus Eisler
The sacred prostitute : eternal aspect of the feminine by Nancy Qualls-Corbett
King, warrior, magician, lover : rediscovering the archetypes of the mature masculine by Robert L. Moore
Dancing in the flames : the dark goddess in the transformation of consciousness by Marion Woodman
The Woman's Encyclopedia of Myths and Secrets by Barbara G. Walker
The great mother : an analysis of the archetype by Erich Neumann
The ravaged bridegroom : masculinity in women by Marion Woodman
She : understanding feminine psychology : an interpretation based on the myth of Amor and Psyche and using Jungian psychological concepts by Robert A. Johnson
The Woman's Dictionary of Symbols and Sacred Objects by Barbara G. Walker
The wounded woman : healing the father-daughter relationship by Linda Schierse Leonard
The hero within : six archetypes we live by by Carol Pearson
Aspects of the Feminine by C. G Jung
Ring of power the abandoned child, the authoritarian father, and the disempowered feminine a Jungian understanding of Wagner's Ring cycle by Jean Shinoda Bolen
The language of the goddess : unearthing the hidden symbols of western civilization by Marija Gimbutas
The crone : woman of age, wisdom, and power by Barbara G. Walker
Owning your own shadow : understanding the dark side of the psyche by Robert A. Johnson
Complex/archetype/symbol in the psychology of C. G. Jung by Jolande Székács Jacobi
Fewer