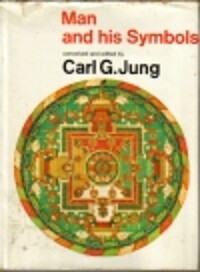 Man and his symbols

The different sections in this book speak for themselves... Jung's own chapter introduces the reader to the unconscious, to the archetypes and symbols that form its language and to the dreams by which it communicates. Dr. Henderson in the following chapter illustrates the appearance of several archetypal patterns in ancient mythology, folk legend, and primitive ritual. Dr. von Franz, in the chapter entitled "The Process of Individuation," describes the process by which the conscious and the unconscious within the individual learn to know, respect, and accommodate one another. In a certain sense this chapter contains not only the crux of the whole book, but perhaps the essence of Jung's philosophy of life: Man becomes whole, integrated, calm, fertile, and happy when (and only when) the process of individuation is complete, when the conscious and the unconscious have learned to live in peace and to compliment one another. Mrs. Jaffe, like Dr. Henderson, is concerned with demonstrating, in the familiar fabric of the conscious, man's recurring interest in - almost obsession with - the symbols of the unconscious. They have for him a profoundly significant, almost a nourishing and sustaining, inner attraction - whether they occur in the myths and fairy tales that Dr. Henderson analyzes or in the visual arts, which, as Mrs, Jaffe shows, satisfy and delight us by a constant appeal to the unconscious.

LibraryThing member DarkWater
If anthropology is the study of what it means to be human, we may consider Jung as much an anthropologist as a formative psychologist, for he does well to remind us unabashedly of what man truly is – a thinking animal, but a chthonic animal nonetheless. Though we may like to think otherwise,
Show More
civilized man is not so different from archaic man. “Thoughts … are a relatively late discovery of man,” he stresses, and yet, as Joseph Campbell points out, “consciousness thinks it’s running the shop. But [in fact] it's a secondary organ of a total human being, and it must not put itself in control. It must submit and serve the humanity of the body.” The “human body represents a whole museum of organs, each with a long evolutionary history behind it.” Truly, “Modern man is in fact a curious mixture of characteristics acquired over the long ages of his mental development. This mixed-up being is the man and his symbols that we have to deal with.”

Contemporary man “is blind to the fact that, with all his rationality and efficiency, he is [still] possessed by powers that are beyond his control. His gods and demons have not disappeared at all; they have merely got new names. They keep him on the run with restlessness, vague apprehensions, psychological complications, an insatiable need for pills, alcohol, tobacco, food -- and above all, a large array of neuroses.” In other words, “What we call civilized consciousness has steadily separated itself from the basic instincts. But these instincts have not disappeared. They have simply lost their contact with our consciousness and are thus forced to assert themselves in an indirect fashion.”

In short, our intimacy with the total psyche has been an unfortunate jetsam of evolved society. But Jung points out, “As a plant produces its flower, so [we know] the psyche creates its symbols. Every dream is evidence of this process.” Thus, through these symbols, through these echoes of the unconscious, we can again come to know and relate to the whole Self. Cultivating a relationship with these symbols means becoming more familiar with the unknown parts of one’s Self (and also with the selfsame struggles of ancient man). Jung reminds us that “the study of individual, as well as of collective, symbolism is an enormous task”, but with his help we find ourselves much closer to accomplishment.
Show Less
7 more
LibraryThing member aulsmith
This collection of essays was designed by Jung to introduce his work to lay people. Evidently all his other work is very technical.

I've long thought that Jungian psychology was at best an misguided effort to understand the role of culture on the individual and at worst a crock. Reading here about
Show More
the analysis of the dreams of several women where the analyst steers them into roles determined for them by a masculine elite, I've decided it really is a crock.

If you still find meaning in 20th century psychological thinking and want to get your life to conform to a Western, middle class standard of "good," you will probably find a lot of interesting material in this book. Otherwise, give it a miss.
Show Less
LibraryThing member DWallaceFleming
This ranks as one of the most interesting nonfiction books I've read. Jung's theories and capabilities to generalize across cultures and through time are nothing short of astounding.

Much of this information is so dense that it gave me the feeling of learning something and being influenced without
Show More
being able to list out general principles.

The illustrations throughout help to strengthen the variety of arguements which are developed and the through-line of counterpoint with Freudian thought creates a nice synergy.
Show Less
LibraryThing member librisissimo
Substance: Jung and his compatriots explain his theories for the non-professional. I find the reasoning about dreams being messages from the subconscious to be circular, regardless of whether or not the theory itself is true. They also go to great lengths to avoid dragging God into the
Show More
conversation, especially as a possible source of the dreams.
Show Less
LibraryThing member michelamad
The first essay (Jung's) was much more interesting than the others, which I found a bit too academic. ¡
LibraryThing member P_S_Patrick
This is a popular account of Jung’s psychological theories, centred on symbolism. This includes chapters on the Unconscious and Collective Unconscious, it’s links to mythology, the process of Individuation, and psychological symbols in the arts, and in psychoanalysis. This was written and
Show More
edited by him when he was near the end of his career, together with four of his disciples who have contributed full chapters.
Unlike his academic works, this is written more for a wide audience, with each chapter here condensing the work of one or more his separate full-length books. For this reason it cannot but help leaving out a lot of the painstaking research that he has done to back up his theories, and presents the findings more on trust. Though there are illustrations throughout from both case histories and research findings, I do not think that these on their own would be sufficient to convince the reader of the credibility of Jung’s theories, were they not already familiar with his longer more detailed works. For a summary however, this book covers a huge breadth of Jung’s work, and does a pretty good job of conveying its importance.
As Jung’s theories touch on so many aspects of life, from art, to dreams, to mythology, mental illness, personal development, and the events of everyday life, this can’t help but being an interesting book. One problem with Jung is that he can sometime come-across as a being a bit mystic, and this reading is not helped in this book where the work is condensed and there is less scope for qualifying terms with scientific precision. I would however still recommend it to those interested in psychology, art, or mythology.
Show Less
LibraryThing member iayork
Here are some of Carl Jung's most advanced theories: This anthology of essays by Jung and his colleagues yields great insights into Jung's school of depth psychology and the psychology of archetypes. This is a must read for any magician and other workers of the mind. One of the later essays reports
Show More
the revelation that the visions of certain attuned minds answer to some of the images of the quantum realm drawn from experiments in quantum physics. Consciousness is a quantum phenomenon expanded to the human scale of size by the central nervous system.
Show Less
LibraryThing member stpnwlf
Very interesting collection of writings about archetypical symbology and psychology.
Fewer