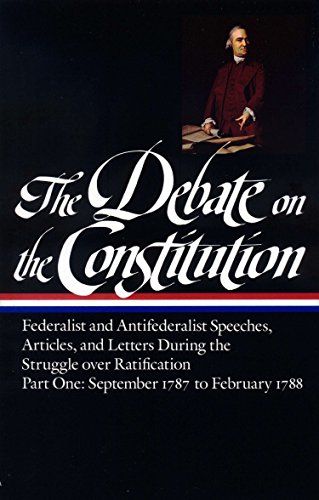 The Debate on the Constitution : Federalist and Antifederalist speeches, articles, and letters during the struggle over ratification

The Debate on the Constitution (1)

New York : Library of America : Distributed to the trade in the U.S. and Canada by Viking Press, c1993-

The ultimate record of the nation's birth, now in a collector's boxed set- During the secret proceedings of the Constitutional Convention in 1787, the framers created a fundamentally new national plan to replace the Articles of Confederation and then submitted it to conventions in each state for ratification. Immediately, a fierce storm of argument broke. Gathering hundreds of original texts by Franklin, Madison, Jefferson, Washington, and Patrick Henry-as well as many others less well known today-this unrivaled collection allows readers to experience firsthand the intense year-long struggle that created what remains the world's oldest working national charter. Here in full are the essential Federalist Papersby Madison and Hamilton in their original dramatic context; the case against the new constitution by Virginian George Mason; and the crucial compromise forged by John Hancock and Samuel Adams in Massachusetts. The set also includes complete texts of the Declaration of Independence, Articles of Confederation, and Constitution (with all amendments); detailed biographical profiles of all authors; informative notes; and a full historical chronology.… (more)

LibraryThing member mikeandali
This is a must read.