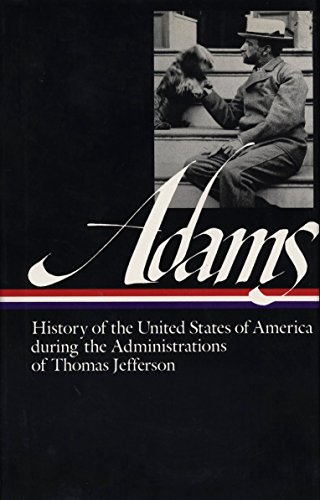 History of the United States of America during the administrations of Thomas Jefferson and James Madison, 1801-1817 (1-4)

One of the greatest histories ever written in English, Henry Adams's History of the United States is remarkable for its fullness of detail, its penetrating insight, and above all its strong, lively, and ironic style. First published in nine volumes from 1889 to 1891, this classic work was out of print for several decades until The Library of America reissued it in two volumes: the first volume on the years of Thomas Jefferson's presidency and the second devoted to those of James Madison. With a cast of characters including Aaron Burr, Napoleon Bonaparte, Albert Gallatin, John Randolph, Toussaint L'Ouverture, and the complex, brilliantly delineated character of Thomas Jefferson, the first volume is unrivaled in its handling of diplomatic intrigue and political factionalism. Upon assuming office, Jefferson discovers that his optimistic laissez-faire principles--designed to prevent American government from becoming a militaristic European "tyranny"--clash with the realities of European war and American security. The party of small government presides over the Louisiana Purchase, the most extensive use of executive power the country has yet seen. Jefferson's embargo--a high-minded effort at peaceable coercion--breeds corruption and smuggling, and the former defender of states' rights is forced to use federal power to suppress them. The passion for peace and liberty pushes the country toward war. In the center of these ironic reversals, played out in a Washington full of diplomatic intrigue, is the complex figure of Jefferson himself, part tragic visionary, part comic mock-hero. Like his contemporary Napoleon Bonaparte, he is swept into power by the rising tide of democratic nationalism; unlike Bonaparte, he tries to avert the consequences of the wolfish struggle for power among nation-states. The grandson of one president and the great-grandson of another, Adams gained access to hitherto secret archives in Europe. The diplomatic documents that lace the history lend a novelistic intimacy to scenes such as Jefferson's conscientious introduction of democratic table manners into stuffily aristocratic state dinner parties. Written in a strong, lively style pointed with Adams's wit, the History chronicles the consolidation of American character, and poses questions about the future course of democracy. LIBRARY OF AMERICA is an independent nonprofit cultural organization founded in 1979 to preserve our nation's literary heritage by publishing, and keeping permanently in print, America's best and most significant writing. The Library of America series includes more than 300 volumes to date, authoritative editions that average 1,000 pages in length, feature cloth covers, sewn bindings, and ribbon markers, and are printed on premium acid-free paper that will last for centuries.… (more)

LibraryThing member wildbill
When I first subscribed to Library of America this is one of the first books that I read. Adams book is an excellent narrative and analysis of Jefferson's administrations. He provides many illuminating quotations from letters and conversations of all of the important persons of the time. For example the details of Napoleon's conversations greatly added to my understanding of him. He also tells in detail some of the most important incidents that occurred. I found particularly interesting his narrative of the impeachment trial of Salmon Chase and the treason trial of Aaron Burr.
If the book is lengthy it is only because of Adams thorough treatment of his subject. I find it interesting that Garry Wills found Adams volume and the one on Madison's administrations significant enough to warrant his recent book about them. One of the lasting images I have from the book is Thomas Jefferson riding alone back to Monticello after his retirement. Just prior to his retirement he had been unable to get the Senate to approve his nominee for the ambassador to Russia.
I highly recommend this volume and can assure you that it worth the time it takes to read. Adams is not only telling the story of Jefferson he is telling the story of the growth of America and its growth as a republic.… (more)
2 more
LibraryThing member Bpolybius
"A history yet to be replaced." C. Vann Woodward
LibraryThing member enoerew
Henry Adams is one of the most eloquent and insightful historians I have ever read, and reading the additional volume covering the administrations of Madison is essential.
Fewer