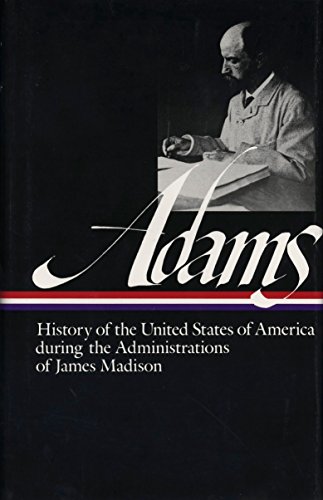 History of the United States of America during the administrations of Thomas Jefferson and James Madison, 1801-1817 (5-9)

This monumental work, the second of two Library of America volumes, culminated Henry Adams's lifelong fascination with the American past. Writing at the height of his powers, Adams understood the true subject as the consolidation of the American nation and character, and his treatment has never been surpassed. Covering the eight years spanning the presidency of James Madison, this volume chronicles "Mr. Madison's War"--the most bungled war in American history. The President and Congress delay while the United States is bullied and insulted by both England and France; then they plunge the country into the War of 1812 without providing the troops, monies, or fleets to wage it. The incompetence of the commanders leads to a series of disasters--including the burning of the White House and Capitol while Madison and his cabinet, fleeing from an invading army, watch from the nearby hills of Maryland and Virginia. The war has its heroes, too: William Henry Harrison at Tippecanoe and Andrew Jackson at New Orleans, Commodores Perry and Decatur and the officers and crew of the Constitution. As Adams tells it, though, disgrace, is averted by other means: the ineptitude of the British, the skill of the American artillerymen and privateers, and the diplomatic brilliance of Albert Gallatin and John Quincy Adams, who negotiated the peace treaty at Ghent. The history, full of reversals and paradoxes, ends with the largest irony of all: the United States, the apparent loser of the war, emerges as a great new world power destined to eclipse its European rivals. LIBRARY OF AMERICA is an independent nonprofit cultural organization founded in 1979 to preserve our nation's literary heritage by publishing, and keeping permanently in print, America's best and most significant writing. The Library of America series includes more than 300 volumes to date, authoritative editions that average 1,000 pages in length, feature cloth covers, sewn bindings, and ribbon markers, and are printed on premium acid-free paper that will last for centuries.… (more)

LibraryThing member kcshankd
I have been chewing on these volumes - including the History of the Jefferson Administration - for some time, since before I started grad school.

A few words won't do nearly 3000 pages justice, but suffice it to say that I am grateful that I working through these concurrent with the 2010 elections, and the upcoming Bicentennial of the Second War with Britain - the War of 1812.

The political issues that I find so riveting are timeless, and the continued dialogue is part of the American experience. The President has been reviled by the 'out' party in every instance since Washington - that is, the advent of parties.

The basic arguments remain the same as well, an expansive view of federal power versus one limited by state sovereignty. What is fascinating is that the 'sides' have seamlessly switched arguments with the outcome of each election.

One further point of interest is how much Madison and Hamilton came to disagree over what they had wrought and argued for in the Federalist. By the turn of the century Madison has retreated back to the Virginia school, a Jefferson protege.

If you have a spare year or three, and are interested in politics, than these are well worth the time invested.… (more)