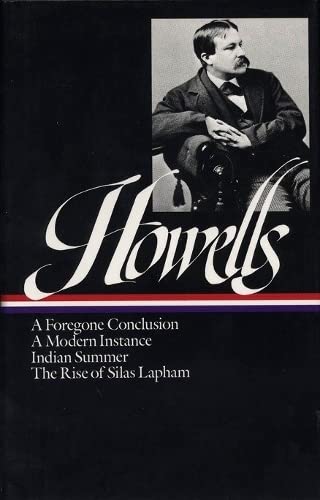 The four novels collected in this Library of America volume are among the classic works from the immensely productive career of America's most influential man of letters at the turn of the twentieth century. William Dean Howells was a champion of French and Russian realistic writers and a brilliant advocate of the most controversial American writers of his own time. In A Foregone Conclusion (1875), a young American painter roams through Europe for years before at last deciding to marry the woman who, he erroneously thinks, has been in love with an Italian priest turned agnostic. A Modern Instance (1882) offers an unflinching portrait of an unhappy marriage and ends with a hero barred by his perhaps overscrupulous conscience from marrying the divorced heroine. Once again personal dilemmas are seen as symptoms of the rapid displacement of older social and religious stabilities by opportunism and commercial progress. One of the most engaging of all his novels, Indian Summer(1885), is touched with the Jamesian glamour of romantic confusion among two American couples in Italy. Here Howells's realism takes a quietly humorous turn. Situations which might be exploited by another novelist for their theatrical or melodramatic possibilities are instead eroded by the often trivial or casual experiences of everyday living. Characteristically, Howells is opposed to exaggeration in the interest of discovering how people, despite the crises that beset them, manage to find their way. The Rise of Silas Lapham (1885), Howells's best-known work, gives a brilliantly skeptical portrait of American business life and its perils, celebrating not the rise but the loss of fortune that makes possible the hero's recovery of his earlier integrity and happiness. "There are," remarked a contemporary reviewer, "thousands of Silas Laphams throughout the United States," and present-day readers might agree that there still are. LIBRARY OF AMERICA is an independent nonprofit cultural organization founded in 1979 to preserve our nation's literary heritage by publishing, and keeping permanently in print, America's best and most significant writing. The Library of America series includes more than 300 volumes to date, authoritative editions that average 1,000 pages in length, feature cloth covers, sewn bindings, and ribbon markers, and are printed on premium acid-free paper that will last for centuries.… (more)

LibraryThing member LauGal
I enjoyed this book. Indian Summer was abt 350 pages. I enjoyed the author's writing style and the story itself. Good character developement and good characters! I just felt this was longer than it needed to be.I plan to read other stories by this author.He was a contemporary of Mark Twain.