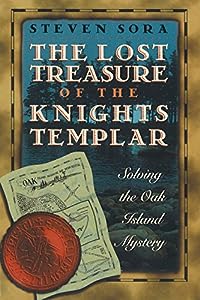 The Lost Treasure of the Knights Templar: Solving the Oak Island Mystery

A compelling argument that connects the lost treasure of the Knights Templar to the mysterious money pit on Oak Island, Nova Scotia, that has baffled treasure hunters for two centuries * Fascinating occult detective work linking the Cathars, the Scottish Masons, and Renne-le-Chateau to the elusive treasure pit on Oak Island * Draws on new evidence recently unearthed in Italy, France, and Scotland to provide a compelling solution to one of the world's most enduring mysteries When the Order of Knights Templar was ruthlessly dissolved in 1307 by King Philip the Fair of France it possessed immense wealth and political power, yet none of the treasure the Templars amassed has ever been found. Their treasure is rumored to contain artifacts of spiritual significance retrieved by the order during the Crusades, including the genealogies of David and Jesus and documents that trace these bloodlines into the royal bloodlines of Merovingian France. Placing a Scottish presence in the New World a century before Columbus, Steven Sora paints a credible scenario that the Sinclair clan of Scotland transported the wealth of the Templars--entrusted to them as the Masonic heirs of the order--to a remote island off the shores of present-day Nova Scotia. The mysterious money pit there is commonly believed to have been built before 1497 and has guarded its secret contents tenaciously despite two centuries of determined efforts to unearth it. All of these efforts (one even financed by American president Franklin Delano Roosevelt) have failed, thanks to an elaborate system of booby traps, false beaches, hidden drains, and other hazards of remarkable ingenuity and technological complexity.… (more)

LibraryThing member bcquinnsmom
I must say, I was expecting a lot more than what I got from this book. There is an island off Nova Scotia where 3 kids poking around found a shaft that someone had dug that may or may not be filled with some kind of treasure. The premise of this book is that it was treasure left at the bottom of
Show More
this strange place by a Scottish family who were heirs to the treasure of the Knights Templar.

Here's the problem: the book doesn't really tell you much about Oak Island because there is not much to know. So while the filler between the first few chapters and the last chapter is interesting, it doesn't really tell you anything about the supposed treasure. And that's okay, because there's nothing to know! The book is VERY unorganized and kind of just rambles from this topic to that topic; there's a lot of unnecessary stuff & a LOT of speculation. However, there is some interesting stuff in here that might make you pause for a moment regarding the roots of Christian holidays & worship. I'm keeping it for now to get a list of the sources that are used in this book, because I've found some avenues for future reading that I want to take.

As far as a resource, the book is probably not too good if you're interested in Oak Island itself, but can be used as a starting point if you're interested in the Knights Templar/freemasonry/the origins of Christianity etc.
Show Less
1 more
LibraryThing member ritaer
Material about the history of the Oak Island Money Pit was interesting, as was the history of the area and of the peoples who have either lived nearby or visited. But the author lost me when he started in on the amateur etymology of the " this people had a word. These other people had a word with a
Show More
similar sound and a similar meaning, therefore they were in contact." No, it doesn't work that way.
Show Less
Fewer

The Sword and the Grail: Of the Grail and the Templars and a True Discovery of America by Andrew Sinclair
Templars in America: From the Crusades to the New World by Tim Wallace-Murphy
The Templar meridians : the secret mapping of the New World by William F. Mann
The Knights Templar in the New World : how Henry Sinclair brought the Grail to Acadia by William F. Mann
The Hiram Key: Pharaohs, Freemasons and the Discovery of the Secret Scrolls of Jesus by Christopher Knight
9 more
Pirates and the lost Templar fleet : the secret naval war between the Knights Templar and the Vatican by David Hatcher Childress, 1957-
Uriel's Machine: Uncovering the Secrets of Stonehenge, Noah's Flood and the Dawn of Civilization by Christopher Knight
The secret treasure of Oak Island : the amazing true story of a centuries-old treasure hunt by D'Arcy O'Connor
The Templars and the Ark of the Covenant : the discovery of the treasure of Solomon by Graham Phillips
The lost colony of the Templars : Verrazano's secret mission to America by Steven Sora
The Sign and the Seal: The Quest for the Lost Ark of the Covenant by Graham Hancock
Bloodline of the Holy Grail: The Hidden Lineage of Jesus Revealed by Laurence Gardner
Holy Blood, Holy Grail: The Secret History of Christ & The Shocking Legacy of the Grail by Michael Baigent
Lost cities of Atlantis, ancient Europe & the Mediterranean by David Hatcher Childress, 1957-
Fewer