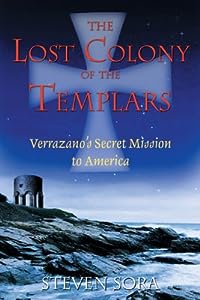 The lost colony of the Templars : Verrazano's secret mission to America

Reveals the existence of a Templar colony in the New World and how the explorer Verrazano, also a member of a secret society, attempted to reestablish contact with it * Explores Columbus's connection to Henry Sinclair's maps of the New World * Examines the secret alliance of Catholic Sulpicians and French Huguenots to preserve the Templar legacy * Reveals the hidden knowledge preserved in the Templar baptisteries found throughout Europe and in Newport, Rhode Island In 1524 the Italian explorer Giovanni da Verrazano was sent by the French king Francis I on an expedition ostensibly to find a shorter route to China. However, his true mission, Steven Sora suggests, was to contact a Templar colony that might have been established in Newport, Rhode Island, by Henry Sinclair at the end of the 14th century. In his expedition log Verrazano recorded that his only stay on this journey was at Newport Harbor, the site of a tower built to the exact measurements of a Templar baptistery, a sacred sanctuary representing baptism and eternal life. This tower is a remnant of Sinclair's voyage to America nearly a century before that of Columbus (who had access to Sinclair's maps thanks to his wife, who was Sinclair's great-granddaughter). While Verrazano's mission succeeded in finding the tower, the colony itself eluded him. His backers then decided to resurrect the dream of Acadia--a place where they could aspire to higher knowledge without fear of Church or state--by creating a new Secret Society that included Huguenots and Catholic Sulpicians. This Company of the Holy Sacrament would lay the foundations for Montreal in an attempt to realize the ambitions of Sinclair and his Templar companions, as well as to stave off efforts by the Jesuits to transform Quebec into a fiefdom of the orthodox Church. Quebec's motto, "Je me souviens" (I remember), is a reference to this secret history.… (more)

Templars in America: From the Crusades to the New World by Tim Wallace-Murphy
The Knights Templar in the New World : how Henry Sinclair brought the Grail to Acadia by William F. Mann
The Sword and the Grail: Of the Grail and the Templars and a True Discovery of America by Andrew Sinclair
Pirates and the lost Templar fleet : the secret naval war between the Knights Templar and the Vatican by David Hatcher Childress, 1957-
The Templar meridians : the secret mapping of the New World by William F. Mann
14 more
The hooked X : key to the secret history of North America by Scott F. Wolter
The Lost Treasure of the Knights Templar: Solving the Oak Island Mystery by Steven Sora
Grail knights of North America : on the trail of the grail legacy in Canada and the United States by Michael Anderson Bradley
Montségur and the mystery of the Cathars by Jean Markale
The Hiram Key: Pharaohs, Freemasons and the Discovery of the Secret Scrolls of Jesus by Christopher Knight
The Templars and the Ark of the Covenant : the discovery of the treasure of Solomon by Graham Phillips
The stone puzzle of Rosslyn Chapel : the truth behind its Templar and Masonic secrets by Filip Coppens
Christopher Columbus, the last templar by Ruggero Marino, 1940-
The tragedy of the Templars : the rise and fall of the Crusader states by Michael Haag, 1943-
The Knights of the Holy Grail: The Secret History of the Knights Templar by Tim Wallace-Murphy
Lost secrets of the sacred ark : amazing revelations of the incredible power of gold by Laurence Gardner
The first American : the suppressed story of the people who discovered the New World by Christopher Hardaker
Uriel's Machine: Uncovering the Secrets of Stonehenge, Noah's Flood and the Dawn of Civilization by Christopher Knight
Discovering the Mysteries of Ancient America: Lost History and Legends, Unearthed and Explored by Frank Joseph
Fewer