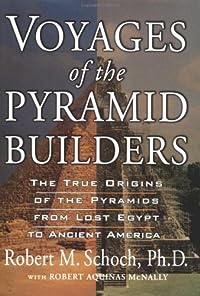 Is it a mere coincidence that pyramids are found throughout our globe? Did cultures ranging across vast spaces in geography and time, such as the ancient Egyptians; early Bud-dhists; the Maya, Inca, Toltec, and Aztec civilizations of the Americas; the Celts of the British Isles; and even the Mississippi Indians of pre-Columbus Illinois, simply dream the same dreams and envision the same structures? Robert M. Schoch-one of the world's preeminent geologists in recasting the date of the building of the Great Sphinx-believes otherwise. In this dramatic and meticulously reasoned book, Schoch, like anthropologist Thor Heyerdahl in his classic Kon-Tiki, argues that ancient cultures traveled great distances by sea. Indeed, he believes that primeval sailors traveled from the Eastern continent, primarily Southeast Asia, and spread the idea of pyramids across the globe, particularly to the New World of the Americas where they abounded until the days of the Conquistadors.… (more)

Secrets of the Great Pyramid by Tompkins, Peter(December 31, 1978) Hardcover
Lost star of myth and time by Walter Cruttenden
The Complete Pyramids: Solving the Ancient Mysteries by Mark Lehner
The pyramids of Egypt by I. E. S. (Iorwerth Eiddon Stephen) Edwards, 1909-
The Velikovsky heresies : worlds in collision and ancient catastrophes revisited by Laird Scranton, 1953-
26 more
Fingerprints Of The Gods: The Evidence of Earth's Lost Civilization by Graham Hancock
Earth under fire : humanity's survival of the Ice Age by Paul A. LaViolette
The Message of the Sphinx: A Quest for the Hidden Legacy of Mankind by Graham Hancock
The Cygnus mystery : unlocking the ancient secret of life's origins in the cosmos by Andrew Collins, 1957-
Temples, tombs, and hieroglyphs; the story of Egyptology. by Barbara Mertz
Voices of the rocks : a scientist looks at catastrophes and ancient civilizations by Robert M. Schoch
The cycle of cosmic catastrophes : flood, fire, and famine in the history of civilization by Richard B. Firestone
The Egyptians (Ancient Peoples and Places Series) by Cyril Aldred
The Egypt Code by Robert Bauval
Maps of the ancient sea kings; evidence of advanced civilization in the ice age. by Charles H. Hapgood
Valley of the Kings: Exploring the Tombs of the Pharaoh by John Romer
Forgotten civilization : the role of solar outbursts in our past and future by Robert M. Schoch
Beneath the pyramids : Egypt's greatest secret uncovered by Andrew Collins, 1957-
The Atlantis Blueprint: Unlocking the Ancient Mysteries of a Long-Lost Civilization by Colin Wilson
The Giza Power Plant : Technologies of Ancient Egypt by Christopher Dunn
Heaven's mirror : quest for the lost civilization by Graham Hancock
Sacred Symbols of the Dogon: The Key to Advanced Science in the Ancient Egyptian Hieroglyphs by Laird Scranton
The Science of the Dogon: Decoding the African Mystery Tradition by Laird Scranton
The stones of Atlantis by David Zink
The path of the Pole by Charles H. Hapgood
1491 : new revelations of the Americas before Columbus by Charles C. Mann
The Sphinx mystery : the forgotten origins of the sanctuary of Anubis by Robert K. G. Temple
The secret of the Incas : myth, astronomy, and the war against time by William Sullivan
Civilization one : the world is not as you thought it was by Christopher Knight, 1950-
The Hiram Key: Pharaohs, Freemasons and the Discovery of the Secret Scrolls of Jesus by Christopher Knight
Tutankhamen: Anenesim, Atenism and Egyptian Monotheism by Ernest A Wallis Budge
Fewer