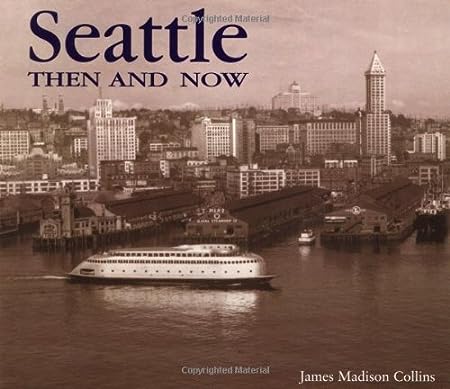 Seattle Then and Now presents archival photos along with modern views of the same sites as they appear today. One can see the city as it looked when Denny Hill still rose above downtown, when the University of Washington occupied a mere city block, when Duwamish canoes still put in at Ballast Island, and when missiles were based in Magnolia and naval aircraft at Sand Point.Thanks to the efforts of preservationists, places like Pioneer Square and the Pike Place Market look much as they did a century ago, while structures such as Union Station and the Eagles Auditorium live on with new uses. This book highlights some of the best-loved places in the city along with striking examples of modern architecture that help make Seattle such a vibrant and innovative city.… (more)

Seattle, now & then by Paul Dorpat
Vanishing Seattle (Images of America) by Clark Humphrey
Skid road : an informal portrait of Seattle by Murray Cromwell Morgan
Seattle, past to present by Roger Sale
Puget's Sound : a narrative of early Tacoma and the southern Sound by Murray Cromwell Morgan
20 more
Seattle Now & Then: Volume 2 by Paul Dorpat
Washington State place names by James Wendell Phillips
Seattle Now & Then: Volume 3 by Paul Dorpat
The last wilderness by Murray Cromwell Morgan
A guide to architecture in Washington State : an environmental perspective by Sally Byrne Woodbridge
Exploring Washington's past : a road guide to history by Ruth Kirk
Doc Maynard : the man who invented Seattle by William C. Speidel
Island in the sound by Hazel Heckman
Native Seattle : histories from the crossing-over place by Coll-Peter Thrush
Whistlepunks & Geoducks : Oral Histories From the Pacific Northwest by Ron Strickland
Utopias on Puget Sound : 1885-1915 by Charles Pierce LeWarne
The Seattle bungalow : people and houses, 1900-1940 by Janet Ore
The Natural History of Puget Sound Country by Arthur R. Kruckeberg
The untamed Olympics; the story of a peninsula by Ruby El Hult
Place of Learning, Place of Dreams : A History of the Seattle Public Library by John Douglas Marshall
Alaska-Yukon-Pacific Exposition : Washington's first world's fair : a timeline history by Alan J. Stein
Digressions of a Native Son by Emmett Watson
Classic houses of Seattle : high style to vernacular, 1870-1950 by Caroline T. Swope
Washington : a centennial history by Robert E. Ficken
Seattle and the Demons of Ambition: From Boom to Bust in the Number One City of the Future by Fred Moody
Fewer