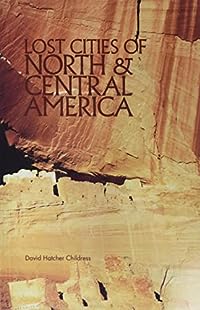 From the jungles of Central America to the deserts of the southwest down the back roads from coast to coast, maverick archaeologist and adventurer David Hatcher Childress takes the reader deep into unknown America. In this incredible book, search for lost Mayan cities and books of gold, discover an ancient canal system in Arizona, climb gigantic pyramids in the Midwest, explore megalithic monuments in New England, and join the astonishing quest for the lost cities throughout North America. From the war-torn jungles of Guatemala, Nicaragua and Honduras to the deserts, mountains and fields of Mexico, Canada, and the U.S.A. Childress takes the reader in search of sunken ruins, Viking forts, strange tunnel systems, living dinosaurs, Thunderbirds, the Egyptian City in the Grand Canyon, early Chinese explorers, and fantastic lost treasure. Packed with both early and current maps, photos and illustrations. Chapters include: Marbles of the Gods; Chinese Taoists & the International Jade Trade; Ancient Megaliths of the Pacific Coast; Lost Cities of the Maya; Alien Gods & the Crystal Skull; Pyramids of t he Gods; Lost Golden Books of the Maya; Quetzalcoatl & the Pyramids of the Sun; El Dorado & the Seven Gold Cities of Cibola; Diving at the Sunken Pyramids of Aztlatlan; The Search For Atlantis; The Megaliths of Norombega; Exploring Ancient Nevada Seas; The Mysteries of Mount Shasta; Lost Cities of the Evergreens; more.… (more)

The Mystery Of The Olmecs by David Hatcher Childress
Lost cities & ancient mysteries of the Southwest by David Hatcher Childress
Lost cities of Atlantis, ancient Europe & the Mediterranean by David Hatcher Childress, 1957-
Advanced Civilizations of Prehistoric America: The Lost Kingdoms of the Adena, Hopewell, Mississippians, and Anasazi by Frank Joseph
Mysteries of ancient South America by Harold Tom Wilkins, 1891-
13 more
Mysteries of the Mexican pyramids by Peter Tompkins
Earth under fire : humanity's survival of the Ice Age by Paul A. LaViolette
Forbidden archeology : the hidden history of the human race by Michael A. Cremo
The path of the Pole by Charles H. Hapgood
Ancient man : a handbook of puzzling artifacts by William R. Corliss
The Ancient Giants Who Ruled America: The Missing Skeletons and the Great Smithsonian Cover-Up by Richard J. Dewhurst
Beneath the pyramids : Egypt's greatest secret uncovered by Andrew Collins, 1957-
Maps of the ancient sea kings; evidence of advanced civilization in the ice age. by Charles H. Hapgood
The Sphinx mystery : the forgotten origins of the sanctuary of Anubis by Robert K. G. Temple
Signs in the Sky: Prophecies for the birth of a New Age by Adrian Gilbert
America B.C. : ancient settlers in the New World by Barry Fell
The Hidden History of the Human Race (The Condensed Edition of Forbidden Archeology) by Richard L. Thompson
Voices of the rocks : a scientist looks at catastrophes and ancient civilizations by Robert M. Schoch
Fewer