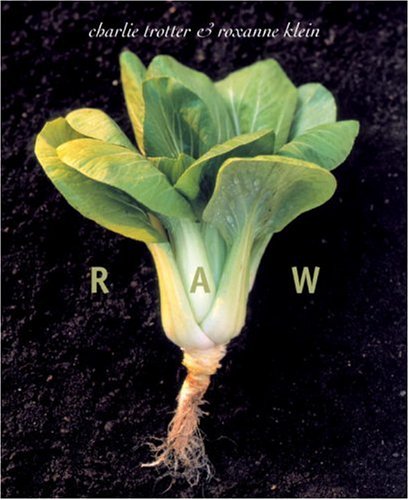 Prepared using basic techniques such as juicing, dehydrating, and blending, raw foods exalt the innate wholesomeness and splendor of fruits and vegetables. Charlie Trotter'-?s raw-food tasting menus at his Chicago restaurant have showcased raw food at the highest level, while Roxanne Klein'-?s eponymous restaurant in Larkspur, California, has become a fine-dining destination, earning her international recognition for her cuisine.Experience the revelation of this dynamic cuisine in RAW, a landmark volume that pairs visionary chefs Trotter and Klein. The authors pay the ultimate tribute to the culinary heights that raw food can scale in such dishes as Broccoflower Couscous with Curry Oil; Three Peppercorn-Crusted Cashew Cheese with Honeycomb and Balsamic Vinegar; Bleeding Heart Radish Ravioli with Yellow Tomato Sauce; and Watermelon Soup with Sharlyn Melon Granit? . Each recipe is complemented by a detailed wine pairing, conceived to heighten the tastes, textures, and aromas of the ensemble. Juices, a natural extension of the raw-food repertoire, are also featured in such soothing preparations as Red Roxie, Prickly Pear and Pomegranate, and Cucumber-Lime Water.Artfully presented with Tim Turner'-?s award-winning photography; healthful; and deeply satisfying, chefs Trotter and Klein'-?s food celebrates ingredients in their glorious natural state. In such skilled hands, raw food is nothing short of a revolution in the the way we cook and eat.… (more)