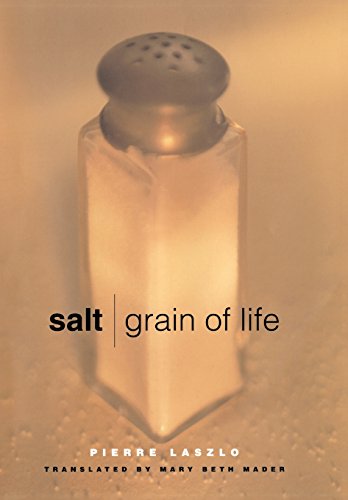 For the sake of salt, Rome created a system of remuneration (from which we get the word "salary"), nomads domesticated the camel, the Low Countries revolted against their Spanish oppressors, and Gandhi marched against the tyranny of the British. Through the ages, salt has conferred status, preserved foods, and mingled in the blood, sweat, and tears of humanity. Today, chefs of haute cuisine covet it in its most exotic forms--underground salt deposits, Hawaiian black lava salt, glittery African crystals, and pink Peruvian salt from the sea carried in bricks on the backs of llamas. From proverbs to technical arguments, from anecdotes to examples of folklore, chemist and philosopher Pierre Laszlo takes us through the kingdom of "white gold." With "enthusiasm and freshness" (Le Monde) he mixes literary analysis, history, anthropology, biology, physics, economics, art history, political science, chemistry, ethnology, and linguistics to create a full body of knowledge about the everyday substance that rocked the world and brings zest to the ordinary. Laszlo explains the history behind Morton Salt's slogan "When it rains, it pours!" and looks into the plight of the salt miner, as well as spectroscopy and nuclear magnetic resonance. Salt is a tour de force about a chemical compound that is one of the very foundations of civilization.… (more)

The Oxford Companion to American Food and Drink (Oxford Companions) by Andrew F. Smith
The Tomato in America: Early History, Culture, and Cookery by Andrew F. Smith
Food: The History of Taste (California Studies in Food and Culture) by Paul Freedman
Salt & Pepper by Sandra Cook
Of Sugar and Snow: A History of Ice Cream Making (California Studies in Food and Culture) by Jeri Quinzio
11 more
We Are What We Eat: Ethnic Food and the Making of Americans by Donna R. Gabaccia
Food: A Culinary History (European Perspectives) by Jean-Louis Flandrin
Chocolate: A Bittersweet Saga of Dark and Light by Mort Rosenblum
Chop Suey: A Cultural History of Chinese Food in the United States by Andrew Coe
Vanilla: The Cultural History of the World's Favorite Flavor and Fragrance by Patricia Rain
Encyclopedia of Pasta (California Studies in Food and Culture) by Oretta Zanini De Vita
Camembert: A National Myth by Pierre Boisard
The Country Ham Book by Jeanne Voltz
The Cambridge World History of Food (2-Volume Set) by Kenneth F. Kiple
The Oxford Companion to Italian Food by Gillian Riley
The True History of Chocolate (Second Edition) by Sophie D. Coe
Fewer