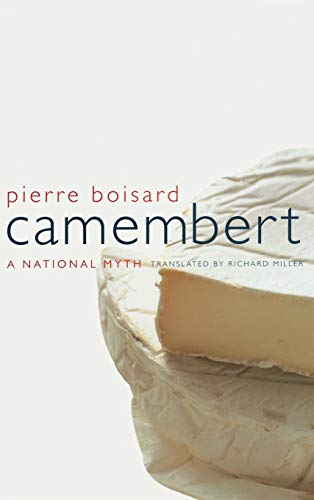 Camembert--delectably fragrant, creamy-centered, neatly boxed--is the most popular and most famous French cheese. Originally made by hand in the Norman countryside, it is now mass-produced internationally, yet Camembert remains a national symbol for France, emblematic of its cultural identity. In this witty and entertaining book, Pierre Boisard investigates the history of Camembert and its legend. He considers the transformation of France's cheese-making industry and along the way gives a highly selective, yet richly detailed history of France--from the Revolution to the European Union. Camembert: A National Myth weaves together culinary and social history in a fascinating tale about the changing nature of food with implications for every modern consumer. As the legend goes, by coincidence, grand design, or clever marketing, the birth of Camembert corresponds almost exactly in time with the birth of the French republic. In this book, republicans and Bonapartists, revolutionaries and priests are reconciled over the contents of a little round box, originating a great myth and a great nation. The story of the cheese's growing fame features Napoleon, Louis Pasteur, the soldiers of the First World War, and many others. Beneath this intriguing story, however, runs a grittier tale about the history of food production. We learn, for example, how Camembert became white--a topic that becomes a metaphor for the sanitation of the countryside--and how Americans discovered the secrets of its production. As he describes the transformation of the Camembert industry and the changing quality of the cheese itself, Boisard reveals what we stand to lose from industrialization, the hallmark of the past century. Today, small producers of raw-milk, ladle-molded Camembert are fighting to keep their tradition alive. Boisard brings us to a new appreciation of the sensual appeal of a lovely cheese and whets the appetite for a taste of the authentic product.… (more)

Of Sugar and Snow: A History of Ice Cream Making (California Studies in Food and Culture) by Jeri Quinzio
Hog and Hominy: Soul Food from Africa to America (Arts and Traditions of the Table: Perspectives on Culinary History) by Frederick Douglass Opie
Cheese Primer by Steven Jenkins
The New American Cheese by Laura Werlin
The Oxford Companion to American Food and Drink (Oxford Companions) by Andrew F. Smith
11 more
The Oxford Companion to Italian Food by Gillian Riley
Milk : the surprising story of milk through the ages : with 120 adventurous recipes that explore the riches of our first food by Anne Mendelson
Perfection Salad: Women and Cooking at the Turn of the Century, With a New Afterword (California Studies in Food and Culture) by Laura Shapiro
Food: A Culinary History (European Perspectives) by Jean-Louis Flandrin
Man Bites Dog: Hot Dog Culture in America (Rowman & Littlefield Studies in Food and Gastronomy) by Bruce Kraig
Salt by Pierre Laszlo
Eating In America by Waverly Root
The New Taste of Chocolate: A Cultural and Natural History of Cacao with Recipes by Maricel E. Presilla
Fried Chicken: An American Story by John T. Edge
Donuts: An American Passion by John T. Edge
Cheese, Pears, and History in a Proverb (Arts and Traditions of the Table: Perspectives on Culinary History) by Massimo Montanari
Fewer