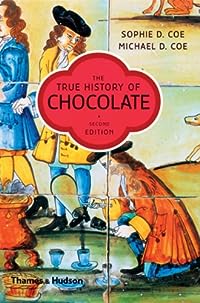 The story begins some 3,000 years ago in the jungles of Mexico and Central America with the chocolate tree, Theobroma Cacao, and the complex processes necessary to transform its bitter seeds into what is now known as chocolate. This was centuries before chocolate was consumed in generally unsweetened liquid form and used as currency by the Maya, and the Aztecs after them. The Spanish conquest of Central America introduced chocolate to Europe, where it first became the drink of kings and aristocrats and then was popularized in coffeehouses. Industrialization in the nineteenth and twentieth centuries made chocolate a food for the masses, and now, in our own time, it has become once again a luxury item.

Vanilla: The Cultural History of the World's Favorite Flavor and Fragrance by Patricia Rain
The Potato: How the Humble Spud Rescued the Western World by Larry Zuckerman
Chocolate: A Bittersweet Saga of Dark and Light by Mort Rosenblum
The New Taste of Chocolate: A Cultural and Natural History of Cacao with Recipes by Maricel E. Presilla
Food: A Culinary History (European Perspectives) by Jean-Louis Flandrin
8 more
A Mediterranean Feast: The Story of the Birth of the Celebrated Cuisines of the Mediterranean from the Merchants of Venice to the Barbary Corsairs, with More than 500 Recipes by Clifford A. Wright
Chocolate: History, Culture, and Heritage by Louis E. Grivetti
Milk : the surprising story of milk through the ages : with 120 adventurous recipes that explore the riches of our first food by Anne Mendelson
Eating In America by Waverly Root
Cod: A Biography of the Fish That Changed the World by Mark Kurlansky
The Science of Chocolate (Rsc Paperbacks) by S. Beckett
Consider the Fork: A History of How We Cook and Eat by Bee Wilson
Simply Sensational Desserts: 140 Classics for the Home Baker from New York's Famous Patisserie and Bistro by Francois Payard
Fewer