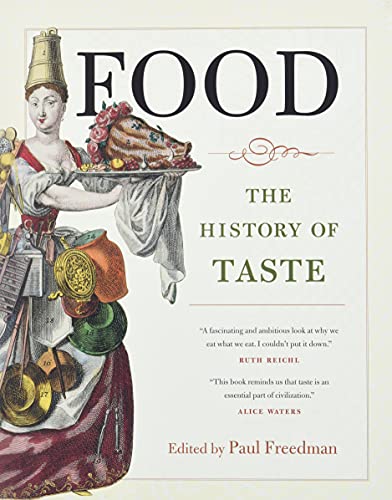 Food: The History of Taste (California Studies in Food and Culture)

This richly illustrated book is the first to apply the discoveries of the new generation of food historians to the pleasures of dining and the culinary accomplishments of diverse civilizations, past and present. Editor Paul Freedman has gathered essays by French, German, Belgian, American, and British historians to present a comprehensive, chronological history of taste from prehistory to the present day. The authors explore the early repertoire of sweet tastes; the distinctive contributions made by classical antiquity and China; the subtle, sophisticated, and varied group of food customs created by the Islamic civilizations of Iberia, the Arabian desert, Persia, and Byzantium; the magnificent cuisine of the Middle Ages, influenced by Rome and adapted from Islamic Spain, Africa, and the Middle East; the decisive break with highly spiced food traditions after the Renaissance and the new focus on primary ingredients and products from the New World; French cuisine's rise to dominance in Europe and America; the evolution of modern restaurant dining, modern agriculture, and technological developments; and today's tastes, which employ few rules and exhibit a glorious eclecticism. The result is the enthralling story not only of what sustains us but also of what makes us feel alive. Copub: Thames & Hudson… (more)

Food: A Culinary History (European Perspectives) by Jean-Louis Flandrin
The Gluttons Glossary: A Dictionary of Food and Drink Terms by John Ayto
The Cookbook Library: Four Centuries of the Cooks, Writers, and Recipes That Made the Modern Cookbook (California Studies in Food and Culture) by Anne Willan
The Oxford Companion to American Food and Drink (Oxford Companions) by Andrew F. Smith
The Oxford Companion to Food 2nd Ed by Alan Davidson
7 more
Of Sugar and Snow: A History of Ice Cream Making (California Studies in Food and Culture) by Jeri Quinzio
The Oxford Companion to Italian Food by Gillian Riley
Perfection Salad: Women and Cooking at the Turn of the Century, With a New Afterword (California Studies in Food and Culture) by Laura Shapiro
The Wilder Shores of Gastronomy: Twenty Years of Food Writing by Alan Davidson
Salt by Pierre Laszlo
The art of eating by M. F. K. Fisher
Consider the Fork: A History of How We Cook and Eat by Bee Wilson
Fewer