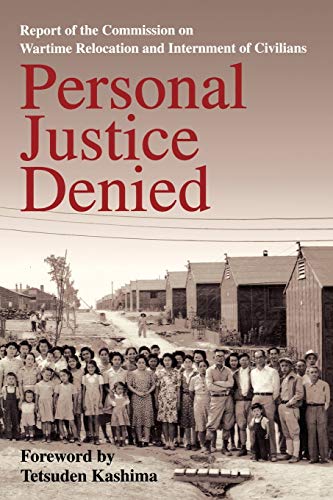 Personal Justice Denied tells the extraordinary story of the incarceration of mainland Japanese Americans and Alaskan Aleuts during World War II. Although this wartime episode is now almost universally recognized as a catastrophe, for decades various government officials and agencies defended their actions by asserting a military necessity. The Commission on Wartime Relocation and Internment was established by act of Congress in 1980 to investigate the detention program. Over twenty days, it held hearings in cities across the country, particularly on the West Coast, with testimony from more than 750 witnesses: evacuees, former government officials, public figures, interested citizens, and historians and other professionals. It took steps to locate and to review the records of government action and to analyze contemporary writings and personal and historical accounts. The Commission's report is a masterful summary of events surrounding the wartime relocation and detention activities, and a strong indictment of the policies that led to them. The report and its recommendations were instrumental in effecting a presidential apology and monetary restitution to surviving Japanese Americans and members of the Aleut community.… (more)

Personal Justice Denied: Report of the Commission on Wartime Relocation and Internment of Civilians (Paper Book)