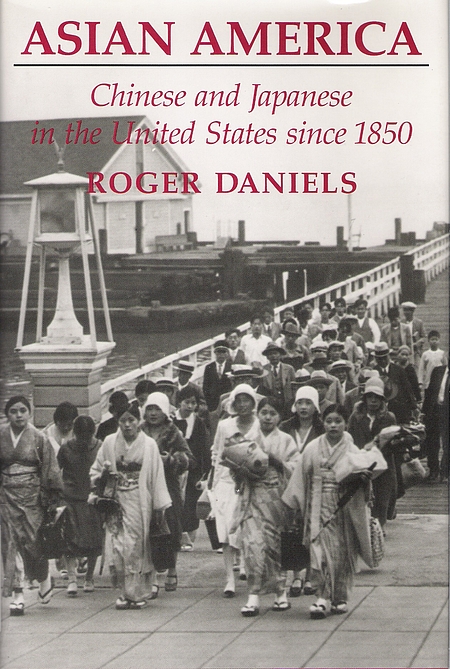 Asian America : Chinese and Japanese in the United States since 1850

In this important and masterful synthesis of the Chinese and Japanese experience in America, historian Roger Daniels provides a new perspective on the significance of Asian immigration to the United States. Examining the period from the mid-nineteenth century to the early 1980s, Daniels presents a basic history comprising the political and socioeconomic background of Chinese and Japanese immigration and acculturation. He draws distinctions and points out similarities not only between Chinese and Japanese but between Asian and European immigration experiences, clarifying the integral role of Asians in American history. Daniels' research is impressive and his evidence is solid. In forthright prose, he suggests fresh assessments of the broad patterns of the Asian American experience, illuminating the recurring tensions within our modern multiracial society. His detailed supporting material is woven into a rich historical fabric which also gives personal voice to the tenacious individualism of the immigrant. The book is organized topically and chronologically, beginning with the emigration of each ethnic group and concluding with an epilogue that looks to the future from the perspective of the last two decades of Chinese and Japanese American history. Included in this survey are discussions of the reasons for emigration; the conditions of emigration; the fate of first generation immigrants; the reception of immigrants by the United States government and its people; the growth of immigrant communities; the effects of discriminatory legislation; the impact of World War II and the succeeding Cold War era on Chinese and Japanese Americans; and the history of Asian Americans during the last twenty years. This timely and thought-provoking volume will be of value not only to specialists in Asian American history and culture but to students and general historians of American life.… (more)

LibraryThing member ladycato
A few things to preface this review: the book is older, with this edition published in 1990. It's also intended as a college textbook or scholarly resource. That said, it wasn't a terrible or slow read, though it definitely was not an enthralling creative nonfiction piece in the modern style.

I read with the hopes of more research data for my forthcoming book series, which meant my focus was on the Chinese and Japanese in America at the turn of the 20th century. At the start, Daniels stated that he wanted to avoid creating a "negative history," wherein the emphasis is on what is done TO the minority people, rather than what they did. This meant that the material on a century ago was more sparse. I have read a number of other books on Chinese-Americans in this period that go into a lot more detail because there were so many wretched things done to combat the perceived "Yellow threat." The advantage Daniels has in this book is that he also brings in the experiences of the Japanese and contrasts that with the Chinese, and shows how their lives fluctuated through the 20th century.

This book is especially strong and detailed on the travails of Japanese Americans during World War II. This wasn't relevant to my research, but was fascinating in its horribleness. I have read about Japanese internment camps before, but Daniels brought in information about the divides within the Japanese community and what happened to those who resisted internment. The final chapters are about the efforts to compensate those who were interred (an effort that the author was involved in) and how the Chinese were treated after the Revolution and how things changed again after 1970s ping-pong diplomacy.

This isn't a "fun" read, but it serves a necessary purpose, and I can see why it was cited in other books I have read.… (more)