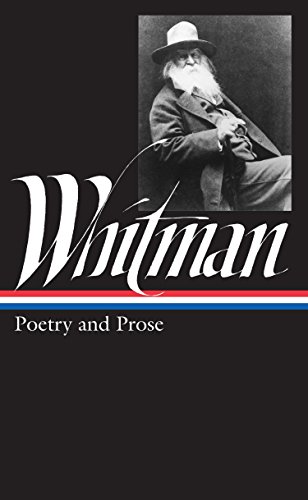 This is the most comprehensive volume of Walt Whitman (1819-1892) ever published. It includes all of his poetry and what he considered his complete prose. This is also the only collection that includes, in exactly the form in which it appeared in 1855, the first edition of Leaves of Grass. This was the book, a commercial failure, that prompted Emerson's famous message to Whitman: "I greet you at the beginning of a great career". These twelve poems, including what were later to be entitled "Song of Myself" and "I Sing the Body Electric", and a preface announcing the author's poetic theories, were the first stage of a massive, lifelong work. Six editions and some thirty-seven years later Leaves of Grass had become one of the central volumes in the history of world poetry. Each edition involved revisions of earlier poems and the incorporation of new ones. In 1856, for example, he added such poems as "Crossing Brooklyn Ferry" and "Spontaneous Me"; in the third edition (1860) "Out of the Cradle Endlessly Rocking" and two new sections, "Calamus" and "Children of Adam". In the fourth (1867) he incorporated the Civil War poems published a few years earlier as Drum-Taps and Sequel to Drum-Taps, including the poems on the death of Lincoln, notably "When Lilacs Last in the Door Yard Bloom'd." And so it went, a triumphant progress, hailed by Emerson, Thoreau, Rossetti and others, but also, as with the sixth edition in 1881-82, beset by charges of obscenity for such poems as "A Woman Waits for Me." Printed here is the final, the great culminating edition of 1891-92, the last supervised by Whitman himself just before his death. Whitman's prose is no less extraordinary. Specimen Days and Collect (1882) includes reminiscences of nineteenth-century New York City that will fascinate readers in the twentieth, notes on the Civil War, especially his service in Washington hospitals, and trenchant comments on books and authors. Democratic Vistas (1871), in its attacks on the misuses of national wealth after the Civil War, is relevant to conditions in our own time, and November Boughs (1888) brings together retrospective prefaces, opinions, random autobiographical bits that are in effect an extended epilogue on Whitman's life, works, and times. Here it all is, the complete Whitman-elegiac, comic, furtive, outrageous-the most innovative and original of American authors.… (more)

LibraryThing member kcshankd
Oh Walt. Finished during bus ride home. Warning - Leaves of Grass may leave you wanting to hug strangers on the bus - so many stories hurtling to the Park and Ride.
2 more
LibraryThing member William345
1. I have finished 1855 edition of Leaves of Grass. Exquisite. His main device is the catalog. He inventories America, good and bad. He loves the totality. I adored this first edition and look forward to reading final edition (1891-92) soon.

What a paean to masculinity, its physicality, the play of physique through clothing--and without clothing. The naked male is here iconographic. It's always a surprise to me how very transparent he was in his preferences so early in our history. Women by contrast, though he seeks to balance his men with them, lack physical detail that brings the lusty descriptions of men to life. ("The Female equally with the Male I sing.") Yet women are far more likely to be described by their setting, the home, or their place amid a tumult of children, than for their sheer physicality. Part of this was simply the age, when there was great outrage against prurient feminine depiction, among so-called civilized society at least. Part seems to be Whitman's disinterest. I'm reminded of Michelangelo's Medici Tombs in Florence, whose female nudes have been criticized as too male, their musculature wrong, their breasts appended almost as an afterthought.

3. Reading Specimen Days next, his big prose miscellany. This begins with an overview of both the paternal and maternal branches of his family and their lives on Long Island, New York, in the early 1800s. The description of L.I. Includes some of his boyish activities there, his friends and their exploits. It's a vivid dispatch from another world. That he writes of these matters so late in life--he visits the old family graveyards and resurrects his dead--lends special poignance. He moves on to his well-known visits to the bedsides of injured Civil War (1861-65) soldiers, mostly Union but Confederate also, among whom his brother George lay convalescing for a time. He writes letters home for the soldiers, distributes small amounts of money, listens to their tales, reads them the Bible, kisses a few, and watches them die. Most are amputees, some gravely ill with typhoid. Some laid helpless on the field of battle for days before being brought to primitive field hospitals. Oh heavens, what scene is this? – is this indeed humanity – these butcher's shambles? There are several of them. There they lie, in the largest, in an open space in the woods, from 200 to 300 poor fellows – the groans and screams – the odor of blood, mixed with the fresh scent of the night, the grass, the trees – the slaughter-house! O well is it their mothers, their sisters cannot see them – cannot conceive, and never conceived, these things.

In the section called "A Cavalry Camp," Whitman's enthusiasm--can we call it ecstasy?--at for the first time being among actual soldiers, and not only the sick, seems to me keen. Back in Washington in August of 1863, he daily sees President Lincoln on L'Enfant's broad, dusty avenues. Before long they have a nodding acquaintence with each other. Sometimes the president is in a barouche, at other times he rides a grey horse amid a detachment of uniformed cavalry, swords drawn.

Let me say this at the halfway point of Specimen Days, everything works! Every phrase is compelling. I have never read a more riveting collection of miscellaneous pieces. After the war, Whitman stayed in Washington to work in in the Office of the Attorney General in 1866 and '67 and, he says, "for some time afterward." In February 1873 he's stricken with a "paralysis" that sounds to me like stroke. It forces him to retreat to the famous little house in Camden, New Jersey. He's bed-ridden there through 1875 and '76. On recovery he is still partly disabled but is able to retreat to a country farm belonging to his friends the Staffords on "Timber Creek, twelve or thirteen miles from where it enters the Delaware." Here the book enters a nature phase. All I see before me now are descriptions of nature. It remains to be seen if I will be as beguiled by these pages as I was by his war recollections.

Song of Myself... very tolerant and accepting of others (from all walks of life).
Fewer

Essays & lectures by Ralph Waldo Emerson
Pierre, or, The ambiguities ; Israel Potter : his fifty years of exile ; The piazza tales ; The confidence-man : his masquerade ; Uncollected prose ; Billy Budd, sailor : (an inside narrative) by Herman Melville
Mississippi writings by Mark Twain
Collected poems and translations by Ralph Waldo Emerson
Herman Melville : Redburn, White-Jacket, Moby-Dick (Library of America) by Herman Melville
20 more
American Poetry: The Nineteenth Century, Vol. 2: Herman Melville to Stickney, American Indian Poetry, Folk Songs and Spirituals by John Hollander
John Steinbeck : Novels and Stories, 1932-1937 : The Pastures of Heaven / To a God Unknown / Tortilla Flat / In Dubious Battle / Of Mice and Men (Library of America) by John Steinbeck
Collected poems, prose & plays by Robert Frost
American Poetry: The Nineteenth Century, Vol. 1: Philip Freneau to Walt Whitman by John Hollander
John Steinbeck: The Grapes of Wrath and Other Writings 1936-1941: The Grapes of Wrath, The Harvest Gypsies, The Long Valley, The Log from the Sea of Cortez (Library of America) by John Steinbeck
Prose and poetry by Stephen Crane
Novels by Nathaniel Hawthorne
Novels Mont Saint Michel, The education by Henry Adams
Novels, 1936-1940 by William Faulkner
Early novels and stories by Willa Cather
Novels, 1930-1935 by William Faulkner
History of the United States of America during the administrations of Thomas Jefferson by Henry Adams
Wallace Stevens : Collected Poetry and Prose (Library of America) by Wallace Stevens
Edgar Allan Poe : Essays and Reviews : Theory of Poetry / Reviews of British and Continental Authors / Reviews of American Authors and American Literature / Magazines and Criticism / The Literary & Social Scene / Articles and Marginalia (Library of America) by Edgar Allan Poe
Stories, poems, and other writings by Willa Cather
Later novels by Willa Cather
Dawn Powell: Novels 1930-1942 (LOA #126): Dance Night / Come Back to Sorrento / Turn, Magic Wheel / Angels on Toast / A Time to Be Born (Library of America Dawn Powell Edition) by Dawn Powell
History of the United States of America during the administrations of James Madison by Henry Adams
Stories, essays & memoir by Eudora Welty
The People of the Abyss / The Road / The Iron Heel / Martin Eden / John Barleycorn by Jack London
Fewer