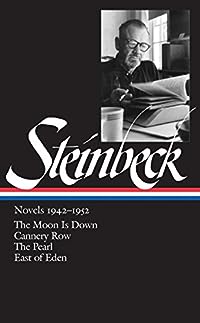 "The Moon Is Down (1942), set in an unnamed Scandinavian country under German occupation, dramatizes the transformation of ordinary life under totalitarian rule and the underground struggle against the Nazi invaders. Told largely in dialogue, the book was conceived simultaneously as a novel and a play, and was successfully produced on Broadway. Although some American critics found its treatment of the German characters too sympathetic, The Moon Is Down was widely read in occupied areas of Europe, where it was regarded as an inspiring contribution to the resistance." "In Cannery Row (1945) Steinbeck paid tribute to his closest friend, the marine biologist Ed Richetts, in the central character of Doc, proprietor of the Western Biological Laboratory and spiritual and financial mainstay of a cast of philosophical drifters and hangers-on. The comic and bawdy evocation of Monterey's sardine-canning district - "a poem, a stink, a grating noise, a quality of light, a tone, a habit, a nostalgia, a dream" - has made this one of the most popular of all of Steinbeck's novels." "Steinbeck's long involvement with Mexican culture is distilled in The Pearl (1947). Expanding on an anecdote he heard in Baja California about a local boy who had found a pearl of unusual size, Steinbeck turned it into a parable of the corrupting influence of sudden wealth. The Pearl appears here with the original illustrations by Jose Clemente Orozco." "Ambitious in scale and original in structure, East of Eden (1952) recounts the violent and emotionally turbulent history of a Salinas Valley family through several generations. Drawing on Biblical parallels, econompassing a period stretching from the Civil War to World War I, and incorporating, as counterpoint to the central story, some of the actual history of Steinbeck's mother's family, East of Eden is an epic that explores the writer's deepest and most anguished concerns within a landscape that for him had mythic resonance."--BOOK JACKET.… (more)