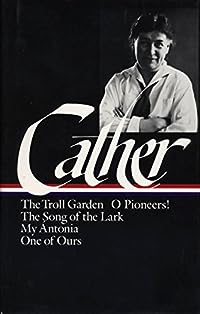 The first of three volumes presenting the writings of Willa Cather includes her early book of stories and first four novels. The troll garden: Cather's first short story collection, originally published in 1905, depicts characters who seek the realm of beauty and imagination, but are confronted by the vulgarity and brutality of American society. O pioneers!: In Nebraska at the end of the nineteenth century, Swedish immigrant Alexandra Bergson leads her family to success, but not without personal sacrifice. The song of the lark: Follows the life of Thea Kronberg from her childhood in 19th-century Colorado to her career as a renowned opera singer. My Antonia: The reminiscences of a New York lawyer, Jim Burden, about his boyhood in Nebraska, particularly a young Bohemian girl named Antonia Shimerda, are set against the backdrop of the American assimilation of the immigrant. One of ours: The son of a prosperous Nebraska farmer yearns to leave his prairie home.… (more)

LibraryThing member JVioland
She is one of my favorite authors. This compilation is one of those that, if you were isolated from society for some time, you would relish reading it over and over again. Cannot praise it enough.