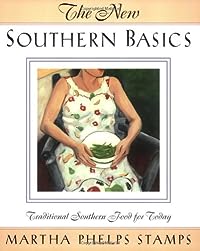 Southern cooking used to be an expression of art and love, according to Martha Stamps, but sometime in the middle of the twentieth century an "abomination of honest southern cooking" took place. As women joined the work force in ever-increasing numbers, their lives became so full that eating became an inconvenience and cooking a chore. "Casserole Cuisine"-just add Velveeta and a can of cream of mushroom soup-pushed aside the traditional hearty, gutsy cuisineof the South. Today homemakers are looking to get back in touch with the foods of character that previous generations took for granted. The cuisine in The New Southern Basics performs that role, reaching back to a generation that took time to do things right and re-creating the basic southern foods in ways that accommodate the tastes of nutritional concerns of our own time. The author exalts the use of fresh ingredients and cooking from scratch, noting that this is more than a matter of style; it tastes better and is much more valuable nutritionally and economically.… (more)

The Heritage of Southern Cooking by Camille Glenn
The Glory of Southern Cooking by James Villas
Craig Claiborne's Southern Cooking by Craig Claiborne
The Lee Bros. Southern Cookbook: Stories and Recipes for Southerners and Would-be Southerners by Matt Lee
The Gift of Southern Cooking: Recipes and Revelations from Two Great American Cooks by Edna Lewis
30 more
Frank Stitt's Bottega Favorita: A Southern Chef's Love Affair with Italian Food by Frank Stitt
A Gracious Plenty by John T. Edge
Chanterelle: The Story and Recipes of a Restaurant Classic by David Waltuck
Savannah Seasons by Elizabeth Terry
Seasoned in the South: Recipes from Crook's Corner and from Home by Bill Smith
New Southern Cooking by Nathalie Dupree
Classical southern cooking by Damon Lee Fowler
Dishes from the Wild Horse Desert: Norteño Cooking of South Texas by Melissa Guerra
The New Book of Soups by The Culinary Institute of America
Frank Stitt's Southern Table: Recipes and Gracious Traditions from Highlands Bar and Grill by Frank Stitt
Charleston Receipts by The Junior League of Charleston
Charleston Receipts Repeats by The Junior League Of Charleston
The Lee Bros. Simple Fresh Southern: Knockout Dishes with Down-Home Flavor by Matt Lee
My New Orleans: The Cookbook by John Besh
Southern Cooking by S. R. Dull
The Complete Southern Cookbook: More than 800 of the Most Delicious, Down-Home Recipes by Tammy Algood
101 things: Authentic Southern Cuisine by Donald Barickman
The Encyclopedia of Cajun & Creole Cuisine by John D. Folse
Texas Home Cooking by Cheryl Jamison
Bon Appetit, Y'all: Recipes and Stories from Three Generations of Southern Cooking by Virginia Willis
The Taste of Country Cooking: 30th Anniversary Edition by Edna Lewis
Rao's Recipes from the Neighborhood: Frank Pelligrino Cooks Italian with Family and Friends by Frank Pellegrino
Niman Ranch Cookbook: From Farm to Table with America's Finest Meat by Bill Niman
The Food, Folklore, and Art of Lowcountry Cooking: A Celebration of the Foods, History, and Romance Handed Down from England, Africa, the Caribbean, France, Germany, and Scotland by Joseph Dabney
Southern Junior League Cookbook by Ann Seranne
Down Home with the Neelys: A Southern Family Cookbook by Patrick Neely
Mastering the Art of Southern Cooking by Nathalie Dupree
Screen Doors and Sweet Tea: Recipes and Tales from a Southern Cook by Martha Hall Foose
My Mother's Southern Kitchen: Recipes and Reminiscences by James Villas
The Kitchen Sessions With Charlie Trotter by Charlie Trotter
Fewer