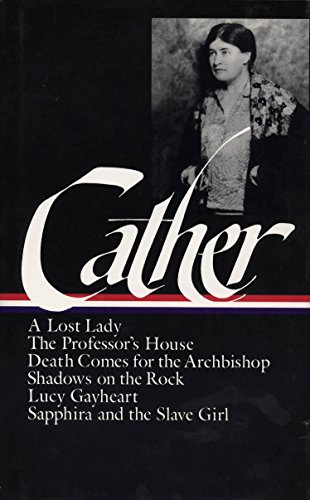 This Library of America volume collects six novels by Willa Cather, who is among the most accomplished American writers of the twentieth century. Their formal perfection and expansiveness of feeling are an expression of Cather's dedication both to art and to the open spaces of America. A Lost Lady (1923) exemplifies her principle of conciseness. It concerns a woman of uncommon loveliness and grace who lends an aura of sophistication to a frontier town, and explores the hidden passions and desires that confine those who idealize her. The recurrent conflict in Cather's work between frontier culture and an encroaching commercialism is nowhere more powerfully articulated. The Professor's House (1925) encapsulates a story within a story. In the framing narrative, Professor St. Peter, a prizewinning historian of the early Spanish explorers, finds himself disillusioned with family, career, even the house that reflects his success. Within this story is another, of St. Peter's friend Tom Outland, whose brief but adventurous life still shadows those he loved. Death Comes for the Archbishop (1927) tells the story of the first bishop of New Mexico in a series of tableaux modeled on the medieval lives of the saints. Cather affectionately portrays the refined French Bishop Latour and his more earthy assistant within the harsh and beautiful landscape of the Southwest and among the Mexicans, Indians, and settlers they were sent to serve. Shadows on the Rock (1931), though its setting and subject are unusual for Cather, expresses her fascination with the "curious endurance of a kind of culture, narrow but definite." It is a re-creation of seventeenth-century Québec as it appears to the apothecary Auclaire and his daughter Cécile: the town's narrow streets, the supply ships on its great river, its merchants, profligates, explorers, missionaries, and towering personalities like Frontenac and Laval, all parts of a colony struggling to survive. Lucy Gayheart (1935) returns to the themes of Cather's earlier writings, in a more somber key. Talented, spontaneous, and eager to explore the possibilities of life, Lucy leaves her prairie home to pursue a career in music. After a happy interval, her life takes an increasingly disastrous turn. Sapphira and the Slave Girl (1940) marks a triumphant conclusion to Cather's career as a novelist. Set in Virginia five years before the Civil War, the story shows the effects of slaveholding on Sapphira Colbert, a woman of spirit and common sense who is frighteningly capricious in dealing with people she "owns," and on her husband, who hates slavery even while he conforms to the social order that permits it. When through kindness he refuses to sell a slave, Sapphira's jealous reaction precipitates a sequence of events that registers a conflict of cultural as well as personal values. LIBRARY OF AMERICA is an independent nonprofit cultural organization founded in 1979 to preserve our nation's literary heritage by publishing, and keeping permanently in print, America's best and most significant writing. The Library of America series includes more than 300 volumes to date, authoritative editions that average 1,000 pages in length, feature cloth covers, sewn bindings, and ribbon markers, and are printed on premium acid-free paper that will last for centuries.… (more)

LibraryThing member lucybrown
I have read most of the novels in this collection and love them all. I really want this collection.
1 more
LibraryThing member AlexRussell
Having finished "The Professor's House," my first Cather work, I've become an instant fan of the author. This odd, slight, but highly moving tale draws in, with increasing interiority, like the unwrapping of a set of Russian nesting dolls, on its true subject: its protagonist's need to cope with a life that has lost its meaning.

That protagonist is Professor St. Peter, a history professor at a small college in the midwest. In the first book, "The Family," St. Peter is introduced, along with the family and friends whom we naively assume provide sufficient meaning to his world, and to the novel. His wife, daughters, sons-in-law, and colleagues are painted with warmth but candid awareness of their limitations, even while the point of view hovers more closely and sympathetically around St. Peter.

The book's most important character, after the Professor himself, is revealed elliptically and gradually; through dinner table conversation we come to understand that the Professor's son-in-law, Louie, is daughter Rosamond's second husband. First husband Tom Outland, a young man of mystery and brilliance, was killed in the World War I. This almost mythical figure, even though absent, gradually assumes ever greater importance throughout the novel, and ultimately overshadows everyone else in the Professor's world.

By the second book, "Tom Outland's Story," all of the family members save St. Peter are off on a trip to Paris, neatly removing them from the novel for its duration. St. Peter, having forsaken his usual scholarship, has decided to edit and annotate Tom Outland's diary for publication, and it is in St. Peter's remembrance of the young man's remarkable story, shared with the reader here, that we come to understand the reason for its importance, and for its centrality in the novel.

Cather uses the literal separation of St. Peter from his family to make a distinction of moral worth: the book turns to St. Peter and his relation to Outland's story because this is where the true meaning of the novel arises. While the first Book reads like a novel of manners, rooted in the preoccupations of a comfortable family in 1920's America, as we read on, those early chapters seem trivial and dated in retrospect. Perhaps this is Cather's aim or perhaps, like St. Peter, she is not really comfortable herself in that claustrophobic world. At any rate, it serves primarily as contrast. In Book Two the writing as well as the story takes on new beauty as it focuses on these two central characters, and on the vistas of the Southwest that provide its setting.

What distinguishes St. Peter and Outland is their relationship to money. Every other character fails Cather's litmus test on this subject. While she takes pains to paint Louie Marsellus as sympathetic and generous, not the easy mark who usurped Tom's wife and fortune, and while she makes it clear that Crane, colleague to St. Peter and Outland, has reasonable aspirations to benefitting from Outland's work, neither can ultimately find a higher value than the monetary. When Roddy, Outland's partner in the discovery of ancient relics in the southwest, sells them out for $4,000, unbeknownst to Outland, we understand the qualitative difference between the two men. Roddy is not an evil man, but he is a materialist.

Ultimately Outland gives up trying to explain to Roddy what the relics meant to him, irrespective of their monetary worth. Cather gives us to understand that Outland's legacy has assumed something of the relation to St. Peter that the relics had for Outland: the monetization of Outland's invention, while reasonable enough in the light of day, in some sense devalues the man by putting a price on his work, and all who benefit from that, himself included, lose favor in St. Peter's eyes.

The novel's final section, entitled "The Professor," is remarkable for its understanding of loss. St. Peter's attempts to prepare for his family's return force him to face the disjunction between the social creation that he has become during years of adulthood and the more essential self with which he is now connecting.

In part because he realizes that none of his relationships can meet the high bar set by his friendship with Outland, St. Peter seems to be confronting loss without hope.

"Perhaps the mistake was merely in an attitude of mind. He had never learned to live without delight. And he would have to learn to, just as, in a Prohibition country, he supposed he would have to learn to live without sherry. Theoretically he knew that life is possible, may be even pleasant, without joy, without passionate griefs. But it had never occurred to him that he might have to live like that." (p. 271)

Somehow, Cather shows us a stoicism without pathos; St. Peter can at least take consolation in knowing what he has lost. Through him, Cather discriminates between what matters and what does not, and shares her subtle understanding with her lucky readers.… (more)
Fewer